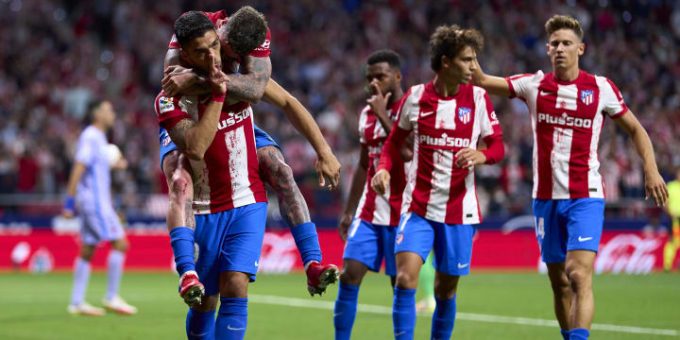 On Sunday, Barcelona and Atletico Madrid will square off at the Camp Nou in the 22nd game of the La Liga 2021/2022 season.

Both teams met earlier this season at the Wanda Metropolitano, with the home side winning thanks to goals from Luis Suarez and Thomas Lemar, and the Catalan giants will be hoping to win and leapfrog their rivals into fourth place this time.

Both teams have a history. The Catalan giants bought out Luis Suárez’s contract last season after deciding he was surplus to requirements and allowed him to join the los colchoneros where he promptly led them to the La Liga title.

Barcelona vs Atletico Madrid Head-to-Head Record
Both sides have met 55 times with Barcelona edging the matchup with 27 wins to Atletico’s 13. Both sides have also been tied on points 15 times.

While Barcelona has dominated overall, the story changes over the last five games. In that period, Atletico have won 3 games while the other two matches ended in a stalemate.

Atletico is currently a point and a place ahead of Barcelona on the standings, with 36 points to Barcelona’s 35.

Form Guide
Barcelona’s form over the last five games in all competitions has been indifferent. In that period, they’ve had two wins, two losses and a draw. (Form: W-L-L-D-W)

In that same period, Atletico has the exact same record and order, with two wins, two losses and one draw as well. (Form: W-L-L-D-W)

Barcelona vs Atletico Madrid Team News
With the transfer window now over, Barcelona has made several attacking additions to their team and will be ready to kick on in earnest.

Aubameyang and Adama Traoré are unlikely to start, but they should be able to contribute from the bench if necessary. Contract rebels Samuel Umtiti and Ousmane Dembélé are unlikely to make the matchday squad due to contractual issues.

Ansu Fati, Sergi Roberto, and Eric Garcia are also expected to miss the game due to injury, while Dani Alves may miss the game after playing the entire 90 minutes against Paraguay on Wednesday.

Injuries are expected to keep Antoine Griezmann, Geoffrey Kondogbia, Marcos Llorente, Stefan Savic, and Ángel Correa out of the game for Atletico.

Barcelona vs Atletico Madrid Prediction
Following the summer upheaval, Barcelona appeared to be on the verge of dropping out of the European places until Atletico Madrid’s poor form allowed them back in. While this game may be too soon for some of their January signings, they will be confident of a positive result at home.