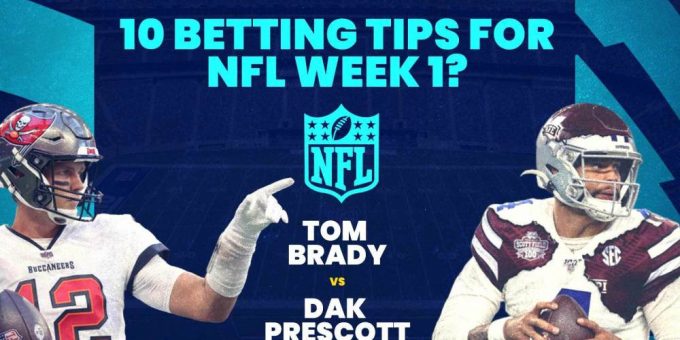 The NFL season is finally back and the Buffalo Bills have drawn first blood by dominating the defending Super Bowl champions, LA Rams in their own home on opening night; a statement win if ever there was one. Ahead of the weekend games, here are our 10 betting tips.

All bets come with some risks especially in the NFL but these Extra Point Bets are some of the easy ones to hit.

This will be a tough game between two teams battling different struggles heading into the season. Buccaneers’ Tom Brady is unbeaten against the Cowboys in his 22-year career with 6 wins out of 6 which should give him some confidence heading into this but his off-the-field issues could be a distraction. He’s retired, unretired, tried joining another team, (reportedly) had his Head Coach removed and, if the gossip blogs are to believed, is having problems with his wife who hasn’t taken his decision to unretire very well. Tampa Bay Head Coach Todd Bowles loves the Blitz Defense, perhaps more than anyone in the league but against the Cowboys, he’ll be facing a Quarterback who is excellent against the Blitz. Last season, Dak Prescott had 21 Touchdowns and 4 Interceptions against the Blitz while only getting sacked 13% of the time in his dropbacks. However, the injury problems on offense might be too much to overcome for the world’s most valuable sports team.

The Patriots have lost their last 3 games to the Miami Dolphins and, all through the pre-season, there have been concerns about the team. The drama behind hiring an Offensive Coordinator to replace Josh McDaniel ended with the team opting to hire two defensive minds to take charge of the offense which is rather unusual and, as expected, that has been met with scepticism. For the Dolphins, they’ve added one of the most dangerous Wide Receivers in the game, Tyreek Hill which should pose a significant threat to the Patriots. Everything points to a Dolphins win but I just can’t see the greatest coach American Football has ever seen losing 4 games in a row to Tua Tagovailoa. Bill Belichick has had more than enough time to prepare for this game and should have a gameplan to cause an upset.

Imagine you’re the most sought-after bachelorette in the country and along comes this man who has little to nothing going for himself but asks you to marry him and promises that together, you two would conquer the world. You agree. Things go well for a bit and the husband’s fortunes begin to change for the better. But then, at the first sign of a problem in the marriage, this man leaves you for another woman who, to be fair, is more sought-after than you but comes with a lot of baggage. A lot. You get a divorce and soon remarry a nicer gentleman leaving your ex-husband with his new problematic but beautiful wife. Cleveland Browns are the Husband #1, the Panthers – the new husband, suspended QB Deshaun Watson is the new problematic wife while Baker Mayfield is the understandably bitter wife #1. This weekend, Wife #1 (Baker Mayfield) alongside his new husband (Panthers) gets a chance at revenge against the ex-husband (Browns);  a team that pretty much threw him out the door.

Russell Wilson returns to the city he brought its only Super Bowl to back in 2014. The 9-year period was one that had its ups and downs and it came as no surprise when things turned sour towards the end. QB Russell Wilson was left upset that the team hadn’t provided him with much protection on offense while also expressing his displeasure at not being consulted when it came to player acquisition; something his fellow Super Bowl winning colleagues got in other teams, In the end, both teams went their separate ways and he landed in Denver. This game will mainly be a battle between him and his former coach Pete Carroll. It’ll be ugly and feisty but the Broncos’ superior collection of talents should see them through.

The Ravens should easily win this game so instead, we’ll be betting on just how dominating the win would be. They’re a team that runs the ball quite well and with that comes more possession of the ball. More possession, of course, means your opponent has less time to be effective on offense and for a New York Jets team already missing starting QB Zach Wilson, they’re likely to have a low scoring game.

The Redzone Bets are our dangerous bets. While they’re risky, always remember, “fortune favours the brave”.

The Jaguars have the better coach in Super Bowl LII Champion, Doug Pederson as well as the better Quarterback in Trevor Lawrence. Doug Pederson is also very familiar with current Commanders QB Carson Wentz who played under him while at Eagles so he should know his strengths as well as weaknesses. The Commanders are a poorly run organisation and owner, Daniel Snyder is arguably the most hated owner in sports alongside Manchester United’s Glazer Family. While the Commanders will be playing at home, there’ll be some sort of protest by the fans which is enough distraction on its own. I see an improved Jaguars team – fresh off the failed experiment that was the Urban Meyer season – going to the nation’s capital and causing an upset.

Joe Mixon & the Bengals face the Steelers, a team that ranked 4th worst in Rushing Defense last season while Alvin Kamara (who holds the record for most Rushing Touchdowns in a game – 6) and his Saints teammates travel to Atlanta to face a Falcons team with a middle of the pack Run Defense. 130+ rushing yards feels like a decent number to combine for.

Last season’s Offensive Player of the Year Jonathan Taylor led the league in rushing (1,811 yards) as he averaged 106.5 yards per game. Steelers’ Najee Harris was 4th on that list (1,200 yards) and averaged 70.6 yards per game.  Betting on both players to combine for at least 159 yards on opening night is a risk worth taking.

Derek Carr averaged the 6th most yards last season with 282.6 and we know the reigning back to back MVP, Aaron Rodgers can sling that rock like no other. While both players will be facing very good defenses this weekend, they will be required to throw the ball a lot especially in the 4th quarter. This is another risky bet with a huge reward.

UPSET OF THE WEEK

The Bengals got to the Super Bowl last season while the Steelers were humbled by the Chiefs in the Wild Card round. The Steelers are beginning life without their legendary quarterback, Ben Roethlisberger who led them to two Super Bowl wins. For the first time in 18 seasons, they’ll  be without him and with this comes some uncertainties in the offense. However, it is hard to overlook the brilliance of their defense. It’ll be led by TJ Watt who was named Defensive Player of the Year last season. His 22.5 sacks last year are the joint most in NFL history since sacks began being recorded in 1982. They also have defensive guru Brian Flores who is now the senior Defensive Assistant and Linebackers Coach while Head Coach Mike Tomlin remains one of the most brilliant defensive minds in the game. That’s 5 mentions of the words “defense/defensive” which tells you how they’ll approach this game.  Last season, they shocked offensive juggernauts Buffalo Bills in the season opener by taking a very patient and defensive approach which saw them get an upset win away from home. I’m going for the same here.