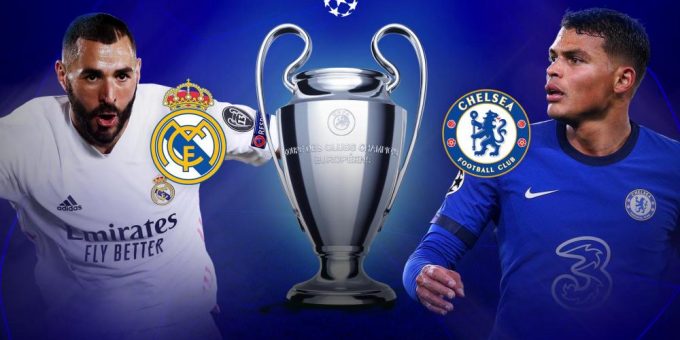 The two European giants each have a fascinating European history and in recent years, a burgeoning rivalry. Real Madrid have won the UCL a record 13 times while Chelsea have won the competition twice.

This season, Chelsea have done well in the cup competitions but have been inconsistent in the Premier League, reflected in their 4 -1 home loss to Brentford after previously winning 6 straight games.

This season, Real Madrid has been more consistent. Their La Liga and European performances have mostly been good. Their lone blemish came against PSG. The fact that they won against the all-star PSG squad shows how the “Los Blancos” can win even when they aren’t playing well.

Read on for our preview of this Real Madrid vs Chelsea heavyweight fixture below!

Chelsea Vs Real Madrid Head-to-Head
The two teams have met only 4 times. Over that period, Madrid have won twice, Chelsea once and the fixture has ended in a draw once.

Chelsea are currently third in the English Premier League with 59 points from 29 games while Real Madrid are 1st in the Spanish La Liga with 69 points from 30 games.

Over that period, Madrid have a similar record with four wins and one loss as well.
(Form: W-L-W-W-W)

Chelsea Vs Real Madrid Team News
Chelsea left wing-back, Ben Chilwell is still out with a long-term injury and will most likely be replaced by Marcos Alonso in the Chelsea lineup. Centre back, Andreas Christensen and winger, Calum Hudson-Odoi are also unlikely to make the Chelsea squad.

Since Eden Hazard signed for Real Madrid, he has failed to live up to the huge fee paid to acquire him from Chelsea. The Belgian forward is injured and will miss this game, along with Isco and Luka Jovic. That will not make the London side feel better, however. The three injured players are all low on the totem pole of the Real Madrid squad.

Chelsea Vs Real Madrid Prediction
The Chelsea players will be eager to win this just like they did last year. They will not be facing an inexperienced team, however. The Real Madrid players have been at the business end of this kind of fixture several times and will count on their more experienced players to lead them past the Blues.

Over 1.5 is as sure a bet as any in this particular fixture. Every Chelsea-Real Madrid fixture has delivered at least 2 goals. At 1.38 in this fixture, we’re treating it as a sure thing.