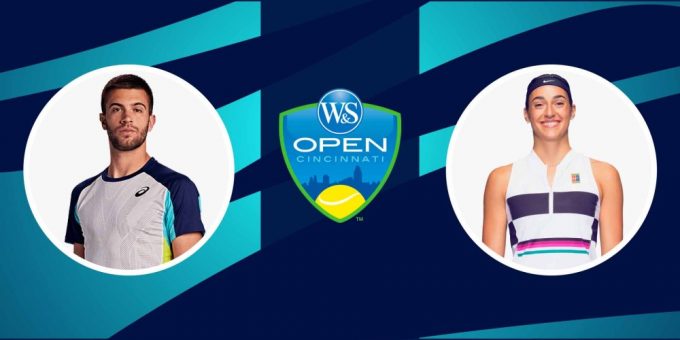 History is made as Coric and Garcia emerge victorious in Cincinnati

The Western & Southern Open produced two of the most unlikely singles champions, bringing the prestigious tournament to an interesting end.

Going into the final, Tsitsipas was the obvious favorite, even beyond the respective rankings. The Greek had beaten World No.1 Daniil Medvedev in the semifinals and was looking to capture his second Masters 1000 title of 2022.

When Tsitsipas raced to a 4-1 lead early in the match, it was expected that he would close it out quickly, but the 24-year-old suddenly dropped the intensity and Coric took advantage.

In the opening game of the second set, Coric saved three break points, stopping Tsitsipas from finding his way back into the match. With multiple errors, double faults and a loss of steam from Tsitsipas, the Croatian sailed to victory by taking the second set 6-2.

For a man who played only nine matches in the whole of 2022, and who spent a year sidelined after shoulder surgery, winning in Cincinnati is an absolute fairytale for Coric. The Croatian only returned to ATP tour action in March and had won only four of the 12 tour-level matches he had played before Cincinnati, but shocked the draw by beating five top 20 players on the way to the title.

Coric’s route to the title:

Coric faced several tough opponents, but the 25-year-old scaled every hurdle, earning the biggest title of his career; his third career ATP title and first in four years.

“I’m not sure to be honest,” Coric said when asked how he pulled it off.

“Like I said many times this week, I didn’t come into this with much confidence. I was not playing my best tennis and I was struggling. I just went match by match and that’s how I did it.”

“It has happened to me before where I’ve beaten big players and then lost the next day. I knew it wasn’t the end of the tournament and wanted to stay calm and focused and I think that’s what I did.”

This big win catapults Coric to 29th in the ATP rankings, ensuring he will be seeded at the US Open which begins in a week. The former World No.12 is on the rise again and could be one to cause problems for the top seeds at Flushing Meadows.

Caroline Garcia also sent a message ahead of the US Open with her incredible run to the Cincinatti title in the women’s draw.

By beating two-time Grand Slam champion Petra Kvitova 6-2, 6-4 in the final, the Frenchwoman has become the first ever player to win a WTA 1000 event as a qualifier.

The 28-year-old has been riding high on confidence almost all summer and that was evident from the very start of the final match. With a quick 4-0 lead in the first set, Garcia was in total control of the match. She fended off break points and potential turnarounds from Kvitova and ultimately took the win in straight sets.

Kvitova was just one of the major adversities Garcia faced during a grueling week. In total, she had to take on three top 10 players on the way.

Garcia’s route to the title:

“I don’t know how to describe that week because I came here on Wednesday night to get ready for quallies,” Garcia said. “Just trying to find my rhythm, to feel better, to get the body healthy and to adapt to the hard court. I didn’t play on hard since Miami, so I was not that confident when I arrived. Every match every day was a new day, new challenge.”

The most in-form woman on tour at the moment, Garcia has now won three titles between June and August, all on different surfaces: on clay in Warsaw, grass in Bad Homburg and now hard court in Cincinnati.

The Frenchwoman, who had struggled with injury and form in the last few years, has now risen from 75th in the rankings two months ago to 17th after her Cincinnati triumph, returning to the top 20 for the first time since 2017.

With 26 wins in her last 30 matches, Garcia will be going into the US Open as a major contender.