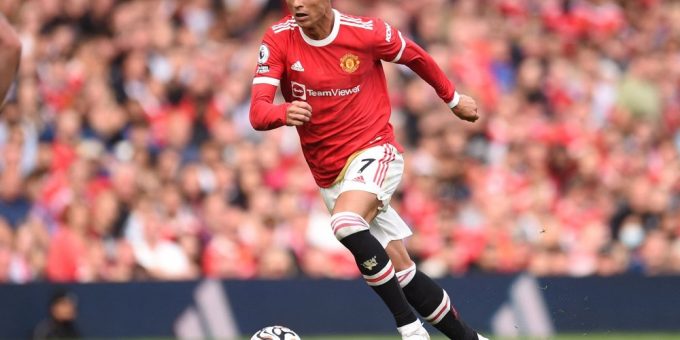 It took just 12 minutes for his audience to be wowed. For his first trick, the magician smashed in an unstoppable shot in from 22 meters before running off to celebrate the goal with his trademark “SIIIIIUUU” celebration as Hugo Lloris beat the ground in frustration.

For his second trick, Ronaldo perfectly timed his run to stay level with Jadon Sancho and tapped the latter’s pass past the helpless Tottenham ‘keeper.

For his third trick, he decided to punish Christian Romero. The Tottenham defender had celebrated in Harry McGuire’s face after the United skipper scored an own goal. This time, Ronaldo chose to dominate the defender in the air before powering a bullet header past Lloris to secure his first Manchester United hattrick in 14 years.

A minute later, the magician departed for the bench to the sound of 70,000 fans cheering his name. At that moment, the entire football world lay at his feet once again.

By the end of the game, he had set three more records. He now held the records for the most goals scored in men’s football (807 goals), the most game winners (257 goals) and the most career hat-tricks (59).

Below, we examine the impact of his record-breaking hattrick and what this means for his Manchester United future.

How Things Have Gone So Far
Ronaldo’s return to the Red Devils was a massive social media event as the club and fans reveled in his choice of them over the much-superior Manchester City.

In his first game back, he netted a brace against Newcastle and the future seemed full of endless possibilities.

As the season went on however, grumblings of discontent began to grow among the same fans who rejoiced at his return. Some complained about chances he missed while others argued that signing him had upset the balance of the team.

On the field, the situation didn’t look promising, as general effort levels dropped and teammates struggled to find Ronaldo’s runs on a consistent basis. One of the more common sights in Manchester United games this season has been their #7 throwing up his arms in frustration after another poor pass failed to reach him.

On Saturday, all of this was forgotten as the entire fanbase united behind Ronaldo as he single-handedly kept their top-four hopes alive.

Future Expectations
On Tuesday, Manchester United will host Atletico Madrid in the second leg of their Round of 16 UCL fixture. Already the competition’s record goal scorer with 135 goals, the Portuguese forward will be eager to add to his tally and knock Atletico out.

If Manchester United make it into the top four by the end of the season, Ronaldo likely stays. However, if the club doesn’t make into the Champions League places, he’ll be on the move.

Club team mate, Paul Pogba, addressed the rumors labeling the forward “A problem” and shut down the allegations. He said: “Ronaldo was brilliant. I think that’s all we needed – a reaction. We scored beautiful goals. Even when we conceded a goal, we came back and scored again. The mentality was there again today.”

“He has never been a problem. You have the best striker in history in our team, he cannot be a problem. Today the performance from him and all the team was very brilliant.”

Final Thoughts
Ronaldo demonstrated on Saturday that, even at 37, he can still guarantee goals as long as he receives the right kind of service. If United are to salvage anything from this season and finish in the top four or even qualify for the latter stages of the UCL, they must consistently put him in the best positions to do what he does best – score lots of goals.