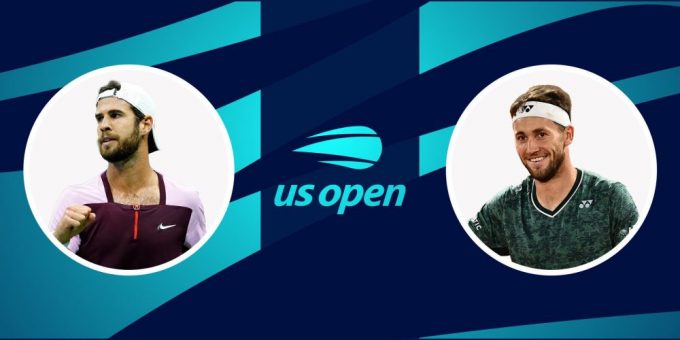 The US Open is gradually wrapping up as the tournament reaches the semifinal stage.

What has been an eventful tournament in every round is set to be even more so as three of the final four men are competing in their first Grand Slam semifinal, with all four of them looking to clinch their maiden Grand Slam title.

Interestingly, two of the four semifinalists have the opportunity to reach the very summit of the rankings after the tournament.

Khachanov was probably one of the most unlikely semifinalists coming into the tournament. The World No.31 was not in the best of form leading up to the tournament, had never come this far at a Grand Slam and was faced with a tricky draw.

It seemed like facing in-form Nick Kyrgios in the quarterfinals would be the end of the road for the Russian at Flushing Meadows, but Khachanov played an incredible match, upsetting the Australian 7-5, 4-6, 7-5, 6-7(3), 6-4 for his first Grand Slam semifinal berth.

Despite little support from the crowd, Khachanov held his own, pulling off an impressive mental performance.

On the other hand, what was expected to be a keenly contested quarterfinal between Casper Ruud and Matteo Berrettini turned out to be almost one-sided.

Ruud, the No.5 seed, appeared more inspired than ever, beating Berrettini 6-1, 6-4, 7-6(4) to make his second Grand Slam semifinal after this year’s French Open.

Ruud and Khachanov’s only meeting happened in Rome back in 2020, on Ruud’s favorite surface – clay. The Norwegian won in three sets.

This time, they will be playing on hard-court where Ruud has shown he can also play comfortably. Knowing a win could take him one step closer to becoming the new ATP World No.1, Ruud will be going all out. He will need to get to the final at least to achieve this feat.

The French Open runner-up will be playing in his second Grand Slam semifinal, so he has a little bit of experience playing at this stage, and that could make him more relaxed than Khachanov.

After such an emphatic win over Kyrgios, Khachanov will be brimming with confidence. He has nothing to lose and, having coming this far, he will fancy his chances of reaching his first major final. The 26-year-old however played five sets in his last two matches and that might have taken a toll on him physically compared to Ruud, who won his last match in straight sets.

In their respective quarterfinals, Ruud and Khachanov served impeccably and this will be key for whoever wins.

This is the more anticipated semifinal, definitely.

Alcaraz has been the talk of tennis all year, taking the sport by storm.

The two youngsters produced arguably the match of the year, battling for five hours and 15 minutes. The match ended as the second-longest in US Open history.

Like he has multiple times in the last year, Alcaraz showed he is worth the hype he has been getting and his incredible tennis has earned him a place in a Grand Slam semifinal for the first time.

Tiafoe’s story is an inspiring one. The American got the biggest win of his career by stunning 22-time Grand Slam champion Rafael Nadal in the round of 16 and brilliantly backed that up with a 7-6(3), 7-6(0), 6-4 win over No.9 seed Andrey Rublev.

The 24-year-old is now the first American man to reach the US Open semifinals since Andy Roddick in 2006 and the first black American man to get to this stage of the tournament since the legendary Arthur Ashe way back in 1972.

Tiafoe, a son of Sierra Leonean immigrants, has always had potential and has finally found his breakthrough at his home Slam this year.

In their only meeting, Tiafoe defeated Alcaraz 6-4, 7-6(2) in Barcelona last season. Alcaraz has however grown tremendously since that clash in April 2021 and comes into this semifinal as the favorite on paper.

Tiafoe is the home favorite though, and considering that American men have not been thriving much at the Slams, the crowd will no doubt be on his side.

In his last two matches alone, Alcaraz has spent over nine hours on court and fatigue could hit him hard especially after that grueling match against Sinner. The young Spaniard’s relentlessness will be instrumental for him to come out on top against Tiafoe, who has dropped just one set en route to the semifinals.

Asides potentially reaching the final of a Grand Slam for the first time, Alcaraz has his sights set on the World No.1 spot and, like Ruud, needs to get to the final at least. The 19-year-old could become the youngest ATP World No.1 in history if he succeeds. That thought could spur him to victory against Tiafoe.

Alcaraz and Tiafoe play relatively similar entertaining, versatile tennis and it will surely not be a walk in the park for whoever prevails.

More than anything, the battle for the World No.1 spot is the major talking point of the rest of the tournament. Nadal, who fell to Tiafoe in the round of 16, will ascend to the top of the rankings again only if both Ruud and Alcaraz fail to reach the final. If Ruud and Alcaraz beat Khachanov and Tiafoe respectively to reach the final, they will both be one win away from becoming World No.1. Whoever wins the final takes it all.

The semifinals are bound to be intriguing, just as the tournament has been from the start.

Don’t miss out on staking on these matches with the best of odds on BetKing.