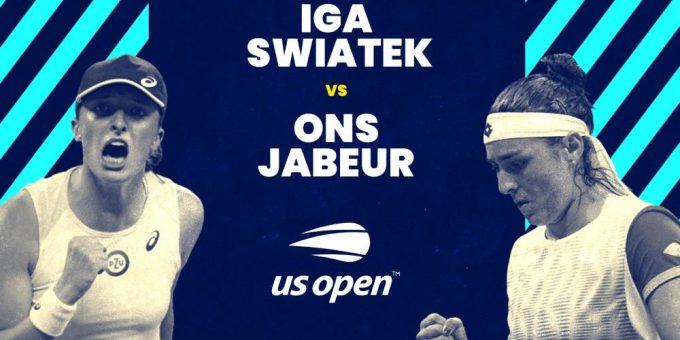 Iga Swiatek and Ons Jabeur clash for US Open title

And then there were two.

As a fortnight of memorable tennis at the last Grand Slam of the year is reaching its climax, it is fitting that the final will be contested by the two best players on tour this year: Iga Swiatek and Ons Jabeur.

From the opening round, many top players were victims of upsets and it seemed like the tournament would produce unlikely finalists. However, Swiatek and Jabeur have stood strong, avoiding the upsets all the way and booking their spots in the final.

While World No.1 Swiatek has had a tremendous year, which included six consecutive titles and a 37-match winning streak in the first half of the season, the Pole came into the US Open far from the peak of her powers, and was barely considered a favorite due to her ranking.

After her 37-match winning streak was snapped by Alize Cornet in the Wimbledon third round, Swiatek had won four of seven matches before the US Open and was clearly not at her best. At Flushing Meadows though, the 21-year-old has fought her way through to the final after coming close to defeat a couple of times.

In the semifinals, Swiatek battled from a set down, then a break down twice in the third set against big-hitting No.6 seed Aryna Sabalenka. Her effective tennis and grit have led her here and she has proved to be a worthy World No.1, capable of slugging out victories despite her struggles.

The Pole is now the first woman to reach the final at the French Open and US Open in the same season since Serena Williams in 2013.

Swiatek’s road to the final:

No.5 seed Jabeur, having the best year of her career, has shown admirable consistency and has now made her second consecutive Grand Slam final. With this, the Tunisian becomes the first Arab and African woman to reach the US Open final.

It’s been milestone after milestone for Jabeur in the last few years and after her Wimbledon final loss to Elena Rybakina from a set down, the 28-year-old will be looking to correct her mistakes from that match and reach new heights by becoming the first ever Arab and African player to win a Grand Slam title.

After her Wimbledon final berth, Jabeur has been tipped to reach major finals and doing it in the next Slam tournament is proof of her consistency.

Jabeur was in potential danger facing red-hot Caroline Garcia in the semifinals, but the Tunisian’s win was easier than expected, halting the Frenchwoman’s winning streak at 13 matches.

Despite winning all but one match in straight sets at Flushing Meadows, many of Jabeur’s scorelines do not quite tell the story of the matches. Multiple times, she was put in difficult situations and had to dig herself out of trouble to earn her victories.

Jabeur’s road to the final:

Swiatek and Jabeur are familiar opponents and their most recent meeting came on clay in the final of the WTA 1000 event in Rome, where Swiatek won 6-2, 6-2.

It really is no coincidence that they face each other in another final, as they have been the two best and most consistent women on tour in 2022. This surely makes for a blockbuster final and an almost perfect end to the last Grand Slam of the year.

At the moment, Swiatek is World No.1 and Jabeur is No.2 in the live rankings. In the race to the season-ending WTA Finals, they are also first and second on the log respectively. Swiatek is contesting her seventh final of the season, Jabeur her fifth.

Both players have been hitting personal and national milestones all year and have been inspiring others while doing so.

The final promises to be a thrilling, keenly-contested match, one that will not be easy for whoever wins. It has potential to go the distance, an outcome that is prized at 2.35 odds on BetKing.

If it has not been glaring to some that Swiatek has not been at her best all tournament, facing Jabeur is set to expose that fact. The World No.1’s impressive defensive skills have been instrumental to her reaching the final, but against Jabeur who can pull out a variety of shots, Swiatek’s defensive game will need to be top-notch. Jabeur’s serve has been one of her major weapons at the U.S Open this year, in stark contrast to Swiatek who has struggled with her serve.

The 28-year-old will likely have the edge in this respect, with BetKing odds of 1.97 available on the Tunisian hitting over 4.5 aces.

Swiatek’s experience in reaching and winning finals, even outside the Slams, suggests she will have the edge in terms of mental strength though. Jabeur is well aware of that.

“Well Iga never loses finals, so it’s going to be very tough,” Jabeur said. “I know she struggled a bit with the balls here but I don’t see her struggling much to be honest with you.

“She’s playing awesome. It’s going to be a tough match. Definitely going for my revenge.”

Swiatek – priced at 1.58 on BetKing to win her third Grand Slam – is also aware that beating Jabeur will not be an easy task.

“She has such good hands; she is solid on the baseline and when she’s going in, so I have to be careful. I don’t know what’s going to happen. Right now, I’m just going to enjoy being in the final.”

Considering the caliber of both players, this is set to be a quality showpiece.