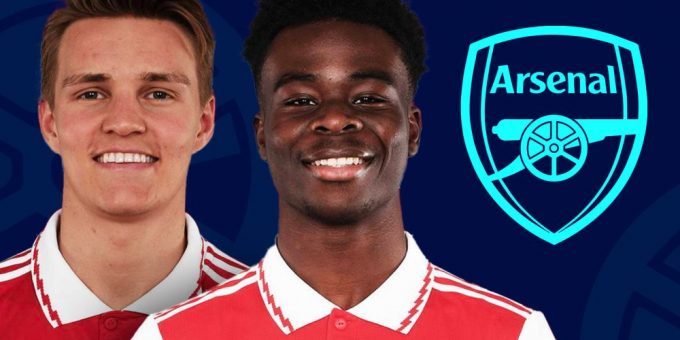 Is vintage Arsenal back, or is this a false dawn?

On the 13th of December, 2021, Arsenal manager Mikel Arteta announced to the press that club captain Pierre-Emerick Aubameyang had been stripped of the Arsenal captaincy following a “disciplinary breach.”

This event would lead to a tumultuous January transfer window for the Gunners, Aubameyang would join Barcelona for free after Arsenal terminated his contract. As if this was not frustrating enough, the club would not sign a replacement striker, rather they would stick with an attack made up of Alexandre Lacazette, Eddie Nketiah, Bukayo Saka and Gabriel Martinelli.

After finishing just one point behind archrivals Tottenham, Arsenal have continued to prune the squad while signing younger players to long-term deals. These new entrants include Gabriel Jesus and Oleksandr Zinchenko, both of whom Mikel Arteta had previously worked with while he was one of Pep Guardiola’s assistant coaches at Manchester City.

Going into the third match week of the season, Arsenal are second on the log, only behind defending champions Manchester City on goal difference.

These are still early days, but the signs are there that the club might finally be in the final phase of its rebuild process, which started with the controversial ousting of fan-favorite Mesut Ozil. Out of the 2019 squad Arteta inherited, there have been over 20 exits, only Héctor Bellerin – who could be on his way out soon-, Bukayo Saka, Nicholas Pepe and Granit Xhaka remain in the squad.

What remains now is a team moulded in Arteta’s image and brimming with promise. However, these are still early days and a lot could change. While Arsenal basks in its newfound glory, here is our analysis of some of their youngsters who we are tipping to be superstars.

Starting out his first team career at left-back and wing-back, the Hale End graduate would eventually be moved to the right side of the wing where he has since flourished. Arguably one of the most consistent of the young crop of players, he has had to weather brutal abuse from fans following his EURO 2021 penalty miss before recovering to pick up the ‘Arsenal player of the season’ award for the 2021/2022 season. What worries fans right now is not whether he would show up on the pitch, it is the matter of his long-term future and if he chooses to extend his contract with the Gooners that concerns the Arsenal faithful.

The Arsenal team have shown they are committed to having a young core, and at the centre of that core has to be Saka.

At Arsenal since he was age 10, Smith-Rowe (alongside Bukayo Saka) is the epitome of London bred and born that the local fans see themselves in.

Extremely talented, Smith-Rowe eventually found regular playing time in 2021 and has rewarded the faith in him with eye-catching performances. However, he has the most competition for a place amongst most of the attacking players, his central attacking midfielder position has been taken up by new captain, ,Martin Ødegaard while Martinelli and Saka occupy the other attacking midfield spots..

He will need to bide his time and trust that the number 10 shirt given to him when he signed a 5-year contract extension in 2021 is an indication of the trust the management have in him.

It is all finally coming together for Gabriel Martinelli. Starting the new Premier League season with two goals in two games is impressive, much more, it is his sharpness and intensity that portends a special season to come for the young Brazilian.

Signed as an 18-year-old from Ituano, Martinelli has shown flashes of brilliance but also has been hampered by injury and inconsistency. However, his performance in the first couple of games shows he could be back to his form from the 2019/2020 season where he scored ten goals along with four assists. After picking up an injury in the following season he has struggled to recapture that from until now.

Watch out for more of his intense pressing and energetic play that causes opposing defenses problems this season.

Recently appointed club captain, the Norwegian is famous for signing a rumored $80,000 per week contract with Real Madrid when he was only 16 years old.

He never truly settled at Madrid and was out of the club on several loan spells. One of those spells was to Arsenal who made the move permanent in 2021.

When Odegaard is on song, then Arsenal likely have excellent games. He is an essential part of Arsenal’s progression and recycling of the ball. With the addition of Gabriel Jesus and Oleksandr Zinchenko, Ødegaard has a more fluid attack to play with, allowing Granit Xhaka to play ahead of him in some phases since Zinchenko often tucks into a left-sided midfield position.

One criticism of his game is his low goal-scoring contribution which could be a result of the potency of the attacking players ahead of him before this season.

One of the players brought up when fans accuse Mikel Arteta of a personal vendetta against certain Arsenal players is 21-year-old William Saliba.

Saliba joined Arsenal from Saint-Etienne in 2019, but did not make a competitive appearance for the Gunners until August 2022. In that period, he was on loan in France where his solid performances in defence for Marseille earned him the  Ligue 1 Young Player of the Year award in the 2021/2022 season.

While he has only played two competitive matches for Arsenal, he looks set to be a mainstay in the back if his performances in those two games are the norm rather than the exception.

He will make mistakes as young, inexperienced players are wont to do, however, it is how he reacts to these mistakes that would define what sort of career he would have at Arsenal.

Just like Saka, he is one of the more  important young players whose contract at the team has to be extended soon.

Arsenal’s fortunes are on the up, a far cry from the way they started last season. While it would seem that Arteta’s vision is finally coming together, they would need to finally “achieve something” by challenging the top two of Manchester City and Liverpool. This would be the true test for these young guns.

Our picks for Arsenal this season

Arsenal to finish higher than Tottenham this season, bringing back “St Totteringham’s day” @ 2.10