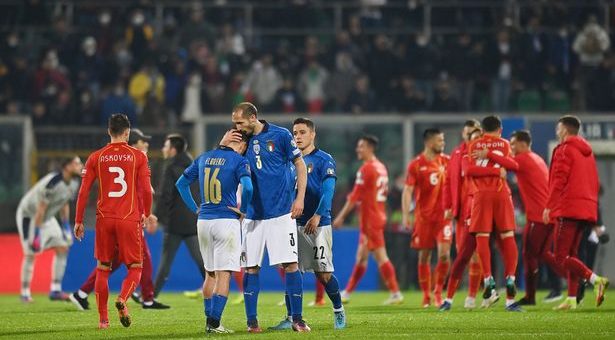 Even in a game where anything can happen, last night’s late North Macedonian goal still shocked the football world.

Italy dominated possession as expected but as the minutes went by and the Azzurri failed to score, Italian fans began to expect the worst.

Three minutes before the end of regulation time, North Macedonia striker, Trajkovski picked up a loose ball in midfield and smashed the ball past Gianluigi Donnaruma. The Italian goalkeeper failed to get down quickly enough, and a couple of minutes later, his team were out of a successive World Cup.

How did this happen and what can we expect going forward?

Inability to Survive Against An Unexperienced Team Without Their Senior Men
Last summer, the Italian National Team deservedly lifted the EURO 2020 trophy after defeating England in a penalty shootout.

They won that trophy by leaning on experienced centre backs, Giorgio Chiellini and Leonardo Bonucci to form a solid foundation that they base their attacking play on.

Already, rumors are filtering in that Chiellini will retire from football at the end of the season. At 34, Bonucci does not have much more left in his legs either. Other leaders and defensive stalwarts need to step up for Italy now.

What Next for Mancini?
When Italy failed to qualify for the 2018 World Cup, most of the blame was deservedly leveled at Head Coach, Giampiero Ventura. That they have a Head Coach who just led them to victory at Euro 2020 will not insulate Roberto Mancini from criticism.

He probably still has some credit in the bank left over from the Euro win but recent baffling decisions will leave him open to deserved criticism. An example of that is his decision to leave forwards, Mattia Zaccagni and Nicolo Zaniolo out of the matchday squad.

Italian legend, Fabio Cannavaro and former Head Coach, Marcello Lippi are being spoken about as likely successors to the current Italy manager.

Forwards, Insigne and Immobile have never managed to replicate their club form with Italy and Domenico Beradi could only hit a tame shot at the Macedonian goalkeeper with the goal gaping.

The injured Federico Chiesa was clearly missed but they still should have been able to get the job done without the Juventus forward.

To avoid being in this situation again, the Italian federation needs to focus on establishing a pipeline of young talent straight into the national team. It won’t be easy and it won’t happen overnight but if their unenviable current position of missing a second straight World Cup will not motivate them to overhaul their system, nothing will.

Donnaruma Form
This season, Gianluigi Donnaruma left his boyhood club for PSG on a free transfer. Unfortunately for him, his first season in the French capital has been an unsettled one. He has already clashed with Keylor Navas this season and made a couple of high-profile mistakes.

Last night, he got down too slowly to keep out Trajkovski’s long-range strike and was blamed by a portion of Italian fans for the loss.

He’s currently a shadow of the player who claimed the Lev Yashin award last year and needs to take the necessary steps to regain his old form or risk losing his place for club and country.

When the World Cup playoff draw was announced, many people expected Italy and Portugal to meet in the final, and eagerly awaited that fixture. Football is rarely predictable, and now Portugal and North Macedonia are will face off for a World Cup berth.

Naturally, Portugal fans are overjoyed at the prospect of not having to face Italy, but their team must put any joyful emotions aside and treat the game as if it were a match against a fellow heavyweight.

If Portugal underestimates North Macedonia, they may find themselves in the same boat as Italy, knocked out of the World Cup by the 67th-ranked team in the world.

Join the club of winners by enjoying the most amazing games, odds and bonuses on BetKing today!