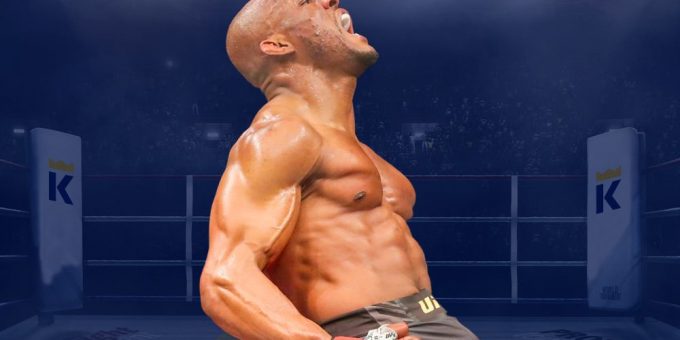 British fighter, Leon Edwards stunned Usman Kamaru early this morning to emerge the new welterweight champion via fifth-round knockout in the UFC 278 on Sunday. Edwards became the first fighter to beat Kamaru in the UFC seven years after losing to him in 2015.

The two fighters came into the fight 10-fight unbeaten streak. Despite Kamaru’s status as the clear favorite, many UFC aficionados pointed out before the fight that Edwards had defeated the likes of Nate Diaz and Rafael dos Anjos before getting a shot at Kamaru’s title and thus, should not be taken lightly.

Kamaru was already cruising to victory after launching a combination of elite wrestling and boxing in the second, third and fourth rounds when Edwards knocked out the champion with a stunning left high kick that immediately ended Usman’s night and title reign in the fifth round.

Is Edwards’ win against Kamaru a FLUKE?

Leon ‘Rocky’ Edwards knows he is likely to get a rematch with Kamaru in the coming days to prove his win was not a fluke. It was evident Kamaru was in a hurry to prove a point towards the end of the fifth round before Edward landed a vicious kick out of nowhere that sent Usman sprawling to the canvas with just seconds left of their five-bout clash.

Leon Edwards in his post-match interview revealed that he had waited for four years for his moment.

Edwards said, “I can’t put it into words. It’s been a long four years. They all doubted me, they all said I couldn’t do it. Look at me now; I go until the battle is done. I do it for everyone coming behind me. I told you it was possible. We can win a belt from the UK. Look at me now”.

“I am from the trenches; I am built like this. I go until the battle is done.

“God is on my side. I said it all week, I felt like this was my moment. Everything that happened in the past – two years out, the pandemic, all of it. They all said I couldn’t come back and do it.

“There is no ring rust. Now look at me, the champion of the world. I was born in Jamaica with nothing, look at me now.”

The biggest score to settle in the 170-pound division (UFC 278) will definitely be the coming rematch between newly crowned champion, Edward and Kamaru.

Still shocked from his defeat to Edwards, Usman Kamaru has vowed to bounce back with vengeance after losing his welterweight title at UFC 278.

‘The Nigerian Nightmare’ and pound-for-pound No.1 wrote on his social media handle; “Champs f*** up sometimes… but we bounce back and come with vengeance.”

Usman had won 13 consecutive fights since his first meeting with Edwards in 2015 and on his way to making the sixth defence title, knocking out top contenders such as Jorge Masvidal and Gilbert Burns during that run.