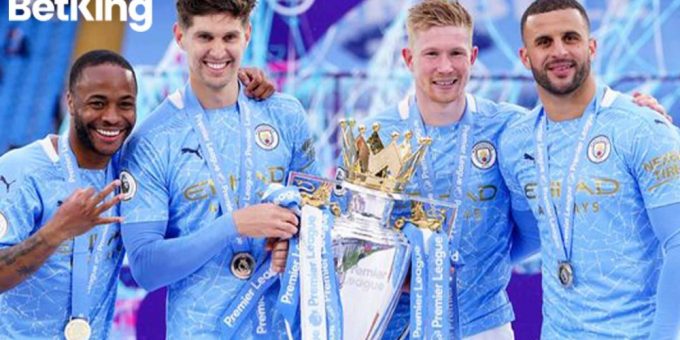 With a title challenge, top four duel and a relegation battle still to be decided, there was enough tension in the air that the games being treated as a pre-summer break exhibition was never a possibility

After the dust settled, Manchester City were champions, Tottenham pipped their North London rivals to fourth place, and Leeds managed to avoid relegation at Burnley’s expense.

With 18 minutes of the season to go, Manchester City’s English Premier League title hopes were hanging on by a thread.

Down 0-2 to Steven Gerrard’s Aston Villa side, the atmosphere in the Etihad Stadium was only still hopeful because Liverpool were being held 1-1 by the visiting Wolves side at Anfield Stadium.

However, the Manchester City fans, coaching staff and players were keenly aware of how dangerous a situation they were in. If the score at the Etihad stayed the same and Liverpool scored a late winner, the title would be snatched from them as cruelly as the Cityzens snatched it from Manchester United on the last day of the 2011-2012 season.

Six minutes later, Gündoğan and Rodri scored in the space of two minutes to draw City level. However, they were still vulnerable. If Liverpool scored, they would lose the League by a point. So when Gündoğan popped up at the back post to convert De Bruyne’s cross in the 81st minute, the Etihad Stadium exploded with pure ecstasy.

When Michael Oliver finally blew the final whistle 9 minutes and added time later, the joy in the Etihad was in stark contrast to the disappointment at Anfield. The two teams had both deserved to lift the Premier League, were separated by just one point and were better than the chasing pack by no small margin.

After 35 games, Arsenal went to the Tottenham Hotspur Stadium four points clear of their rivals and with the opportunity to end Tottenham’s top-four hopes.

Despite losing three straight games to Crystal Palace, Southampton and Brighton, Arsenal had steadied the ship with victories over Chelsea, West Ham, Manchester United and Leeds.

The Gooners had momentum and the expectation was that it would be a hard-fought derby game. Instead, the away team fell apart and lost 3-0, handing the momentum to Tottenham.

The next matchday, the collapse was complete as a resurgent Newcastle outfought and outplayed Arsenal, allowing Tottenham to move two points clear with a 1-0 victory over Burnley.

Despite Arsenal’s 5-1 win over Everton, Tottenham’s 5-0 victory against already-relegated Norwich meant the Gooners were relegated to the Europa League.

The two North London rivals struggled earlier in the season. Where Tottenham hired an established coach and strengthened their squad in January, Arsenal backed Mikel Arteta and allowed him to weaken the squad in the January transfer window. Spending next season out of the UEFA Champions League is a direct consequence of those decisions.

What next for Manchester United and Ronaldo?

If you’d bet on all the Premier League final matchday fixtures to end in an “over 2.5” result, you’d have been cursing at the TV by the final whistle as all fixtures but one ended up with an “over 2.5” result. The offending fixture? Crystal Palace – Manchester United ended 1-0 and was the final sad result in a terrible campaign for English Football’s biggest club.

The numbers make for terrible reading. The Red Devils finished 35 points behind the Champions, scored 42 less goals than Man City, was closer in points to relegated Burnley than City, conceded 57 goals, the worst defensive record in the top 7. Incoming manager, Erik ten Hag has a herculean task on his hands as he tries to steer the Red Devils back to the rarefied air they used to inhabit.

Realizing that “Mr. Champions League”, Cristiano Ronaldo will spend next season playing in the Europa League barring any changes has to be a shock. At his age, it will be hard for him to get another club who are willing to pay his massive wages, despite his overwhelmingly positive effect on United this season.

Where will the Portuguese superstar find himself next season?

Leeds pull off late escape to stay in the EPL

After making the difficult but necessary choice to fire Marcelo Bielsa in February after four losses on the bounce, Leeds almost went down anyway.

Luckily for their fans, they had just enough fight left in them to come back and beat Brentford 1-2 at the death on Sunday. As the final whistle blew to confirm their Premier League status for another season, their rivals for the last Premier League spot, Burnley, were relegated to the Championship.

Leeds are old English Football royalty and their 9th-place finish last season would have had their fans dreaming of a return to lofty heights once again. This harsh reality check of a season has hopefully left them better prepared for the less glamorous parts of the Premier League next season.

To begin with, football honors are unfairly slanted towards forwards at the detriment of defensive players. But that isn’t the point here.

Should Heung-Min Son and Mohamed Salah be upset about Kevin de Bruyne winning the Player of the Year award? Probably.

Due to his outstanding performance over the season, especially in the final stretch of games, De Bruyne is a deserving POTY winner. While Mo Salah would have been a deserving champion, losing the award to De Bruyne is understandable.

Salah, De Bruyne, and Son have been the three finest players in the English Premier League this season. Failing to recognize the South Korean forward’s outstanding performance with a POTY candidacy is a gaffe the Premier League really should not be making.

Which teams are poised to dominate next season?

Next season, we can expect the two Premier League giants to maintain the same high standards. Poised to challenge them however, will be the two London teams, Chelsea and Tottenham Hotspurs.

Chelsea’s acquisition of Romelu Lukaku at the beginning of last season was supposed to be the move that allowed them to challenge City and Liverpool for the Premier League title. Unfortunately, that didn’t quite happen.

With new owner, Todd Boehly, already in place, their biggest priority next season will be to back Thomas Tuchel and to acquire players that actually fit his game plan.

Tottenham will be delighted to make the UEFA Champions League, especially ahead of hated rivals, Arsenal. Questions persist, however. Does Antonio Conte even want to stay? With Erling Haaland now at City, does that mean Harry Kane stays?

Arsenal might also be a factor but longer term, we see Newcastle as the more serious threat. The Midlands side showed gumption and quality to fight back and finish 11th after being relegation favorites for the first part of the season. All they have to do now is follow the template that Man City already set and they’re good to go.

With the domestic Football season over, you can bet on the UEFA Champions League final and bet on the several other sports we have available for you on BetKing!