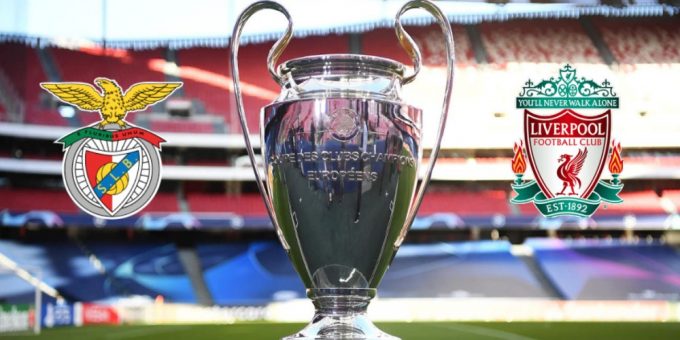 Liverpool F.C will be heading to the Estadio da Luz tonight to face Benfica in what’s being perceived as a very favourable Champions League first-leg draw for the Reds.

Jurgen Klopp’s men have made it this far after throwing Inter Milan out of the competition 2-1 while Benfica will come into the match following a 3-2 victory against Ajax.

If you’re looking to place winning bets on the Liverpool vs Benfica clash, read on for match preview, head-to-head, team news and expert football betting tips.

Liverpool vs Benfica Head-to-Head
Looking back over past encounters between the two teams, the Reds hold the advantage, having won 6 games as opposed to Benfica’s 4.

As for recent form, Benfica had a 9-match unbeaten streak in all competitions before their defeat by Braga last week. (Form: L-W-W-D-W-W-D)

Liverpool players are currently on a 4-match winning streak and will be hoping to continue their victory run when they face Benfica on Tuesday night.
(Form: W-W-W-W-L-W-W).

Nelson Verissimo’s side have never been able to progress past the Champions League quarterfinals in its existing format.
The Reds score an average of 2.4 goals in matches against Benfica while the Portuguese side score an average of 1.3 goals in their Liverpool fixtures.
The teams have scored 35 goals between them in their head-to-head.
Benfica have scored at least 1 goal in 17 games in a row.

Liverpool vs Benfica Team News
On Benfica’s side, attacker Rodrigo Pinho and centre-back Lucas Verissimo will be missing in action. Forward Adel Taarabt might be back in the line-up but there are still doubts regarding his availability.

As for Liverpool news, star right-back Trent Alexander-Arnold may be rejoining the team after recovering from his hamstring injury. Joel Matip and Curtis Jones may also be fit enough to play while Naby Keita will most likely be out due to a knee injury. Luis Diaz has been in top form recently for both his club and his country (Columbia) and we expect Klopp to include him in the line-up.

Liverpool vs Benfica Betting Tips and Prediction
Benfica have displayed consistently good performances, including an impressive 68 goals in the league this season, of which Darwin Nunez bagged 21. However, the Reds are a force to reckon with, with superstars like Sadio Mane, Diogo Jota and Mohamed Salah part of the team, the latter being one of the best football players across the globe.

Here are some football betting tips from our experts to keep in mind when placing your bets:

Liverpool to win.
Over 2.5 goals.
Both teams to score.