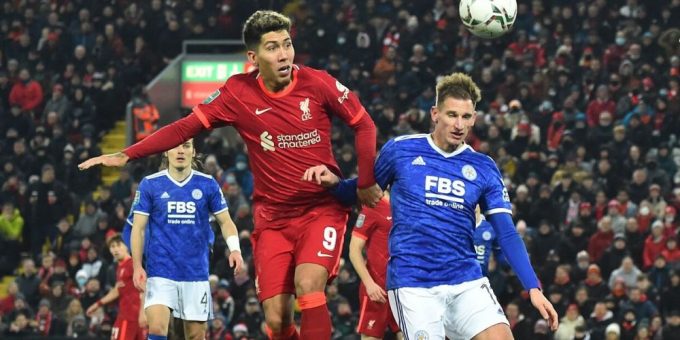 Both sides met at the King Power Stadium in December where the home team stunned Liverpool F.C to win 1-0. After their woeful title defense last season, the Reds would have been hoping for a chance to beat City to the title this season and equal Manchester United’s record haul of 20 league titles. However, they started poorly and slipped far behind Guardiola’s side.

Despite that poor start, City’s draw at Southampton last month has opened the door for Liverpool players to move within 6 points of their rivals.

Liverpool vs Leicester City Head-to-Head
Liverpool dominate in the head-to-head battle, including Premier League fixtures. The Merseyside club has won twice as many games as Leicester, with 14 wins in 26 games across all competitions, while the points have been shared five times.

In their last ten meetings, the Liverpool squad won six, Leicester won two, and two games have ended in a draw after 90 minutes (Liverpool eventually won the other draw on penalties in the EFL cup).

Both teams have already met twice this season, with Leicester winning once and Liverpool progressing in the EFL cup on penalties.

Form Guide
Liverpool have won four games and drawn one out of their last five games. (Form: W-W-W-W-D)

Leicester, on the other hand, have won twice, lost twice and drawn one game in that period. (Form: L-D-L-W-W)

Liverpool vs Leicester Team News
In Liverpool news, the team has kept an impressive record even with star forwards Sadio Mane and Mohamed Salah away on AFCON duty for the last month. Salah has returned, but this game is probably too close for him to play. Mane will definitely miss out.

New signing Luis Diaz is fit again after picking up a knock against Cardiff while Joe Gomez and Alex Oxlade-Chamberlain are back in the squad after recovering from COVID-19.

For Leicester, Wesley Fofana is still out with a long-term injury while Ryan Bertrand, Timothy Castagne, Jonny Evans and Jamie Vardy are still out injured. New AFCON champ, Nampalys Mendy is also unlikely to feature for the Foxes.

Liverpool vs Leicester City prediction
Both sides have missing players on both sides, expect to see some changes in both starting XIs.

Liverpool know that a win puts them firmly back in the title race and will be up for this one. They rarely slip in such positions.

Keep an eye out on Premier League live scores at BetKing and place your bets now!