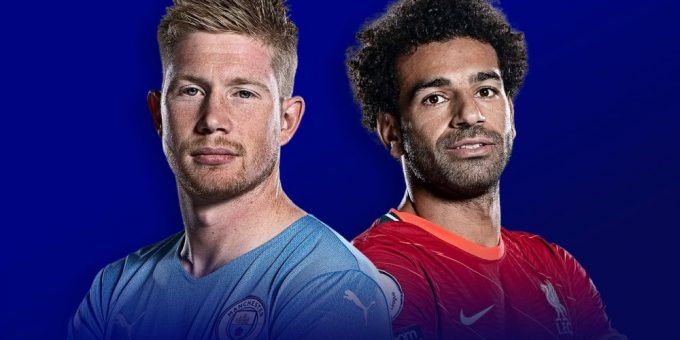 This Sunday, the English Premier League’s two heavyweights – Manchester City and Liverpool go H2H in the season decider game at the Etihad Stadium.

Examine the stats: For the last five seasons, one of these two sides has won the Premier League. In 3 of the last 5 seasons, both teams have been neck-and-neck, finishing first and second in the EPL.

The Liverpool players are just as experienced as the Manchester City players. Both squads are full of skillful internationals and world-class stars. Most importantly, they have been here before at the business end of the season and know how to close out strongly.

This season, they’re the two favorites for the title as usual. Going into Sunday’s match, only one point separates both teams. Who wins this titanic battle and gains the advantage in the ‘21/’22 EPL stakes?

Read on below for our analysis and match preview!

Manchester City vs Liverpool FC Head-to-Head
The two sides have quite a history, with 51 games played in total. Liverpool’s historical dominance is reflected in this fixture, the Reds have won 23 games while City have managed 10 wins. The rest of their fixtures have also ended in a draw 18 times.

Manchester City are just a point ahead of Liverpool on the Premier League table. The two teams already met this season – the 2-2 draw at Anfield.

Liverpool’s amazing form is what has put them just a point behind City with the opportunity to go ahead on Sunday. The Merseyside team have won their last five games. (Form: W-W-W-W-W)

Manchester City vs Liverpool team News
Manchester City’s only notable absence is Ruben Dias. The Portuguese centre back is currently out with a hamstring injury and will miss Sunday’s game. The Manchester City squad is a deep one, however. They should be able to cope with the Reds, even without their best defender.

After missing the Watford win with an injury, Trent-Alexander Arnold was back in the Liverpool squad against Benfica on Tuesday and even made the starting XI.

With the right back’s return, Liverpool have no players injured and can make their strongest XI on Sunday.

Manchester City vs Liverpool FC Prediction
One thing this fixture guarantees is goals. There’s a lot at stake and we will see a lot of fouls as the game goes on, particularly when Jack Grealish comes on.

We go with Manchester City to win this clash.

Bet on the Man City vs Liverpool game and other English Premier League games this weekend on Betking!