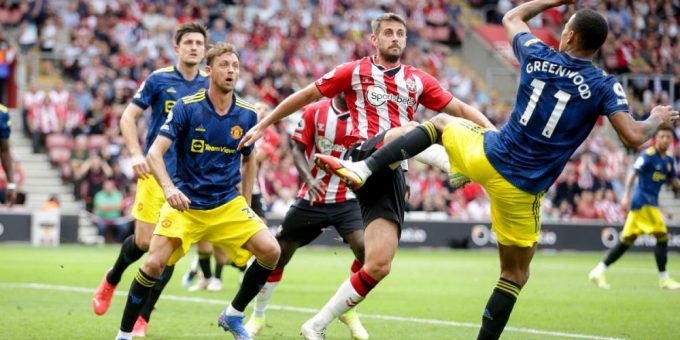 Despite making the most high-profile signings ahead of the 2021-2022 English Premier League season in an attempt to challenge Manchester City and Liverpool for the title, Manchester United find themselves battling for a spot in the Champions League places instead.

Tomorrow, Manchester United players welcome Southampton at the Theatre of Dreams, aware that they handed their top four rivals a boost with their last draw away to Burnley. They will look to rectify that and move back into the UCL places with an early win.

How does this game turn out? Does the home side win to strengthen their UCL hopes? How does Manchester United line up? Does Southampton win away again to dent a top-four team’s hopes? Read on to find out.

In the 35 Manchester United fixtures against Southampton, the former have dominated with 22 wins. The visitors have won just four games while both sides have split the points nine times.

When both sides met in the last ten games, there were six draws and four United wins, including that unbelievable 9-0 victory last February.

Both sides have already met once this season, sharing the points with a 1-1 score line.

Man United have won just two out of their last five games, losing once and drawing twice. (Form Guide: D-L-W-W-D)

Southampton have a better record over that period with three wins, one draw and one loss. (Form Guide: W-W-D-L-W)

In Manchester United news, Alex Telles returns for the home side while Eric Bailly and Fred will both miss out. Apart from Greenwood who isn’t been considered for selection, Ralf Rangnick has a full squad to pick from.

Ronaldo would not have expected the season to go so badly when he got his Manchester United transfer in the summer. He’ll be looking to get back into the starting lineup and back amongst the goals again.

Southampton will not have Alex McCarthy, Nathan Tella, Nathan Redmond and Lyanco available for the game while Tino Livramento and Armando Broja should be fit to play.

United cannot afford to slip up again so expect them to come out strongly and try to dominate the game. Southampton will not be cowed so easily; however, they know they can come away from Old Trafford with a positive result if they can replicate their performance at White Hart Lane here.

The Manchester United players will also be aware that the blame for an unsuccessful season will not fall on the manager alone and will be eager to end this season on a high.

Prediction: We don’t trust United to make this straightforward. Another draw is a likely result but we expect the Red Devils to come out stronger.

For the best Premier League betting, odds and bonuses, the best choice is always Betking. Come over and join our Kingdom today!