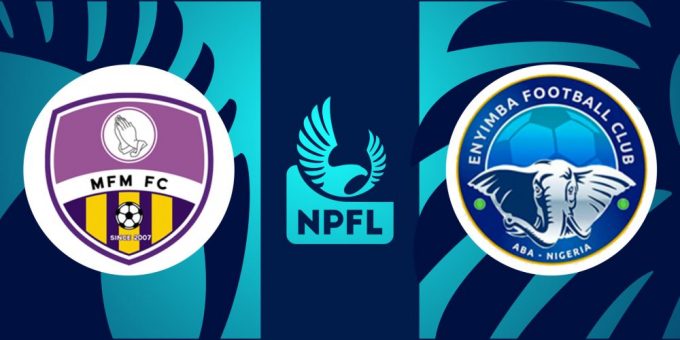 It’s a classic mismatch in the Nigeria Professional Football League this weekend as MFM host Enyimba FC at the Teslim Balogun Stadium.

The home team is currently propping up the entire league in last position, while the fourth-placed visitors can move into third place with a win here, especially if Enugu Rangers fail to win this weekend.

If you love NPFL football, read on for our match preview and betting tips below!

The two teams have faced each other nine times with the home team winning just one game and Enyimba winning four times. They have also both shared the points four times.

Both sides have met once this season already. In February, Enyimba hosted MFM at the Enyimba Stadium. The game finished 1-1 with Victor Mbaoma scoring for Enyimba and Chukwudi Ekeocha scoring for MFM.

Form guide
Unsurprisingly for the bottom-ranked team, MFM has won just one of its last five games with three draws and one loss rounding up the Lagos-based side’s poor form. (L-D-D-W-D)

Enyimba, on the other hand, has won three of the last five games and lost twice. (W-L-W-W-L)

Neither side has reported injuries in their squad. Both are expected to name their strongest available XIs.

MFM have struggled to score recently. The home team has scored just 5 goals in their last 5 matches while Enyimba have scored 9 goals in their last five games.
MFM have scored just 28 goals and conceded 23 goals while Enyimba have scored 38 goals and conceded 30 goals.
Enyimba striker, Victor Mbaoma has scored 15 goals this season, the second-most in the division while MFM striker, Oladayo Alabi is the Lagos-based club’s top scorer with just six goals.

MFM have been poor this season. This should be an easy win for Enyimba @ 2.87

Bet on the remaining NPFL games this weekend below!