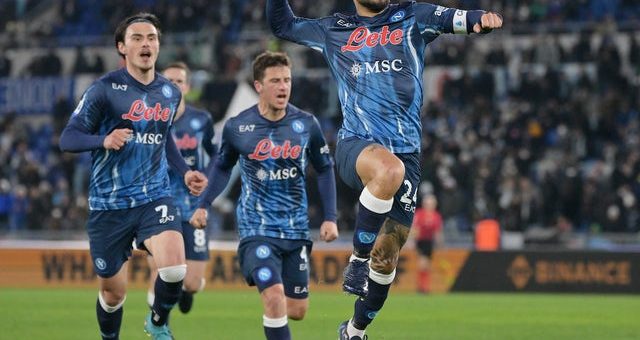 Both sides were expected to be in the top four this season as Juventus challenged Inter but somehow, they’re the closest challengers of the reigning champions while Juventus is still several points behind in 4th place.

Napoli will lose talisman Lorenzo Insigne after he refused to take a pay cut and signed with Canadian side, Toronto FC. However, he’s still a key player for the Neapolitan side and will be a key figure for them in attack tomorrow, along with Nigerian striker, Victor Osimhen.

Ageless striker, Zlatan Ibrahimović’s absence for the Milan giants this season has not been as keenly felt as expected this season because of Olivier Giroud. The French striker has led the line superbly and will be central to Milan’s hopes of a crucial away victory here.

Read on below for the H2H analysis, form guide, team news and match prediction!

Napoli vs AC Milan H2H Record
Both sides have faced each other 32 times. In that period, the home side have won 12 games and AC Milan have won 8 games. This fixture has also ended in a draw 12 times.

In their last ten meetings, Napoli have won 4 games, Milan 2 and they both shared the points 4 times.

Both sides are currently level on points in the Italian Serie A with 57 points each, but Napoli, at 2nd, is a place ahead of AC Milan due to a superior goal difference.

Form Guide
Napoli’s record in the last five games has been poor with a solitary win, three draws and one loss. (Form: W-L-D-D-D).
In that period, Milan has two wins and three draws. (Form: D-D-D-W-W)

Team selection: Napoli vs AC Milan News
Napoli head coach, Luciano Spalletti, has an almost full squad to call upon, with the exceptions of injured players, Kevin Malcuit and Axel Tuanzebe. Victor Osimhen is expected to start upfront with support from Insigne, Zielinski and Politano while further back, Koulibaly will lead the defence as usual.

For Milan, Olivier Giroud will hold up play and bring the likes of Rafael Leão and Brahim Díaz into play while Theo Hernández provides a dual threat from left wing-back. Unfortunately for Stefano Pioli, Ibrahimović, Simon Kjær and Alessio Romagnoli are still out of the AC Milan squad.

Napoli vs AC Milan prediction
The AC Milan players and coaching staff have shown tremendous will in the last couple of seasons to get to where they are and will expect to win this game. However, Napoli are at home and have dominant players in defence and attack as well.

This is a hard game to call either way, but we expect a lot of goals from this game.