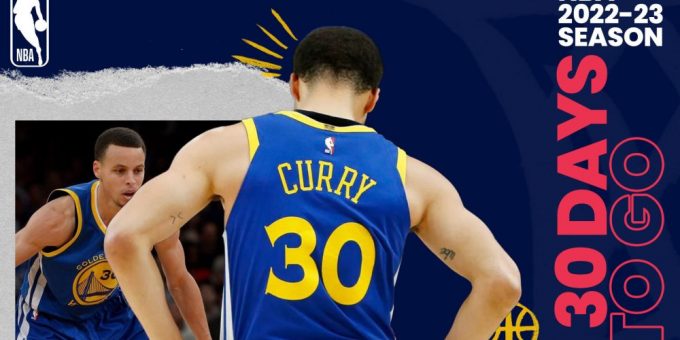 The last NBA season ended with Steph Curry FINALLY getting his first NBA ‘Finals MVP’ award after leading the Golden State Warriors to victory against the Bolton Celtics. It had been a long hard road back to the summit of the NBA and the celebrations that night underscored how much it meant to the superstar and his teammates.

Now, another season is about to begin and as usual, there have been moves and countermoves in the world’s biggest basketball league as other teams try to make the moves that would help them challenge the title holders this season. Whether those moves are the right ones remains to be seen, however.

With 30 days to go until the new NBA season kicks off, here are three of the biggest storylines we can expect next season.

Who will be crowned MVP?

After getting overlooked for so long, front court players are finally back in style; Milwaukee Bucks Power Forward, Giannis won the previous two MVPs before Jokic and is a top-three favorite again this season, along with 76ers Center, Joel Embiid.

At 5.00, Luka Doncic is the current MVP favorite. Still just 23, he’s already one of the best 5 players in the NBA. Since the Dallas Mavericks don’t have a reliable running mate for the Slovenian, that could count against him if Dallas win considerably less than the teams of other contenders.

In our opinion, Joel Embiid is better placed to win the MVP this season. With James Harden looking like his 2017-2018 self again, the Cameroonian Center should finally have the help he needs to lead Philly to an Eastern top-two place and win his first MVP award. At 6.25, he’s reasonably priced too.

Which team wins the NBA title?

There are several teams that can win the NBA title this season. Boston Celtics (6.00), last season’s losing finalists, are the favorites this season after running back their squad and making some savvy additions. Jayson Tatum, Jaylen Brown, and Marcus Smart will attempt to lead the team to another NBA Finals and hopefully win it, under the tutelage of Nigerian coach, Ime Udoka.

Last season’s winners, the Golden State Warriors (7.25), have lost several members of their title-winning squad including Gary Payton II to the Portland Trailblazers and Otto Porter Jr to the Toronto Raptors due to an escalating tax bill. As long as they have Steph Curry, Draymond Green, and Klay Thompson, they will always have a chance to win.

The Los Angeles Clippers and the Milwaukee Bucks are both priced at 7.75 to win it all. The Milwaukee Bucks have Giannis and Khris Middleton supporting him, of course, but the Clippers have added John Wall to a team that has Paul George and the returning Kawhi Leonard. If Kawhi Leonard is anything near his peak, they’ll be a force to reckon with in the West.

The Brooklyn Nets have managed to save their season by somehow convincing Kevin Durant to stay. Alongside Kyrie Irving and a motivated Ben Simmons, he will push to win the ring that has eluded him since he moved to New York from the Golden State this year. At 8.25, Brooklyn should be worth a punt.

Will drama tear apart the Lakers?

Even in a league as dramatic as the NBA, dysfunction on the Lakers has been elevated to a unique art form.

Last season, Lakers’ superstars, LeBron James, and Anthony Davis, pushed for the acquisition of a third superstar to reduce the heavy workload they faced. With DeMar DeRozan on the table and openly pushing for a move to the Lakers, they opted for Russel Westbrook instead. Well, we all know how that one went. DeRozan was a top-ten MVP candidate who also started the All-Star game while Westbrook was benched at the end of close games and suffered the indignity of having a historically bad offensive season.

This time around, the Lakers have added Patrick Beverly, a player that Westbrook cannot stand to the team. While both players claim to be okay with the trade, the situation in the locker room could get very dicey if the former MVP is not traded before the trade deadline this season.

LeBron James’ new contract also puts added pressure on the organization to somehow get creative and add the pieces needed to maximize the career of one of the greatest ever players to dribble a basketball. The Lakers are currently priced at 16.o0 to win the NBA title. Can the Lakers somehow pull off an unlikely win and still keep the locker room as cordial as possible?

As usual, there will be several other storylines before opening night when the Boston Celtics face the Philadelphia 76ers and the Golden State Warriors face the Los Angeles Lakers and as always, we have the best odds for you to bet on for the upcoming NBA season.