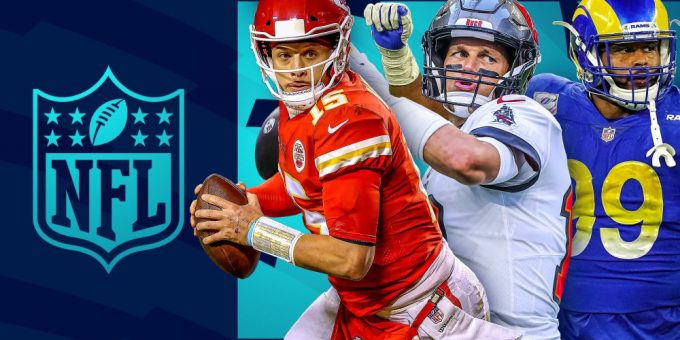 PICKING THE DIVISION WINNERS AHEAD OF THE NEW NFL SEASON

The 103rd NFL season is finally here and the race for Super Bowl LVII is on. As expected at the start of every NFL season, things appear straightforward and clearer than ever but as soon as that pigskin flies on opening day, everything as we know it could be shaken; trades will happen, key players will get injured, some players might get suspended and a  player might just take off his jersey in the middle of a drive, toss it to the floor and storm off to the locker room as he quits the team. It’s the NFL, you can’t really tell.

This season, the talent in the AFC Conference is at an all-time high. Superstar Quarterbacks like Josh Allen, Patrick Mahomes, Lamar Jackson, Deshaun Watson & Joe Burrow have been joined by veterans Russell Wilson and Matt Ryan while upcoming stars like Justin Herbert, Mac Jones and Trevor Lawrence would be looking to take their teams to the playoffs. It is widely believed that the winner of the MVP will come from the AFC Conference but much respect has to be shown to the NFC Conference which has produced the winners of the last two MVPs as well as the last two Super Bowl Champions.

Last season, the Cincinnati Bengals were one drive away from winning the Super Bowl as they were upstaged by the LA Rams. Yet, it was one hell of a fairytale season by Joe Burrow and his teammates whom no one was expecting to win a playoff game before the season started. It wouldn’t be the biggest surprise if they were to win the AFC North again with the improved talents on both sides of the ball but I’m sticking with the Baltimore Ravens here. Last season, they had to endure lots of injuries and ended the season on a 6-game losing streak. This season, Head Coach John Harbaugh has a highly motivated Lamar Jackson who is on a contract year and is out to replicate the performances of his Unanimous MVP season. While the Ravens aren’t exactly the strongest at Wide Receivers, they’re one of the most dangerous teams on the ground and they do utilise the Tight End position as well as anyone. With Cleveland Browns Quarterback Deshaun Watson serving an 11-game suspension and Pittsburgh Steelers struggling on offense, this will be a battle between the Ravens and the Bengals and I’m going for the former.

Last season, The Tennessee Titans went 12-5 and secured the No. 1 seed in the AFC without star Running Back Derrick Henry. This was an impressive feat that deservedly earned Mike Vrabel the Coach of the Year award for the first time in his career. However, as the Titans have shown, an overreliance on running the ball isn’t sustainable all season long. Also, the loss of AJ Brown to the Eagles and the unpredictability of Ryan Tannehill at the Quarterback position could be a concern for them.

The Indianapolis Colts are favourites to win the division; something they haven’t done in 8 years. They’ve replaced Carson Wentz with veteran QB Matt Ryan which should prove to be significant while the addition of Yannick Ngakoue & 2019 Defensive Player of the Year, Stephon Gilmore to DeForest Buckner & Kwity Paye on defence should be enough to push them over the top. With reigning Offensive Player of the Year, Jonathan Taylor expected to have a similar season as he did last year when he led the league in Rushing Yards & Rushing Touchdowns, the Colts should win this.

This is perhaps the easiest pick out of the 8 divisions in the entire league. It’ll be one of the biggest shocks in recent years if the Buffalo Bills don’t comfortably come out on top. They’re not just expected to win their division, they’re also expected to make the Super Bowl and produce the league MVP in Josh Allen. While the Miami Dolphins are should be better this season with the addition of Tyreek Hill on Offense and Mac Jones is expected to improve on his Rookie season which saw him take the New England Patriots back to the playoffs, a relatively healthy Buffalo Bills team should have this wrapped up with 4 games to go.

From the easiest division to predict, we jump right into the toughest division. 3 of the 4 starting QBs in this division are part of the Top 7 most paid players in the league and the only player who isn’t (Justin Herbert) is widely expected to be the highest paid player in the history of the NFL once his contract is up for renewal. That says a lot about the quality of these 4 teams. The Las Vegas Raiders were given the least favourable odds to advance but this off-season, they added the best Wide Receiver in the league in Davante Adams and also hired Josh McDaniels as head coach, the man who helped Tom Brady win 6 of his 7 Super Bowls including 3 where he served as Offensive Coordinator for the New England Patriots. It wouldn’t be the biggest shock to see them win it. The Denver Broncos just added Super Bowl XLVIII champion, Russell Wilson and handed him a $296 million contract extension making him the second highest paid player (per year) in the league. They have a promising core of players and it is widely expected they make a significant improvement as well.

The Kansas City Chiefs have not only dominated this division in recent years but they’ve hosted the AFC Championship game in each of the last 4 seasons; no team, not even Tom Brady’s New England Patriots, achieved that. However, the loss of one of QB Patrick Mahomes’ most dependable weapons in Tyreek Hill could hurt them in the short run. In his absence, JuJu Smith-Schuster, Marquez Valdes-Scantling & Mecole Hardman are expected to try and fill the void while superstar Tight End Travis Kelce could have his most productive season yet. The Los Angeles Chargers are my pick to win the division. On paper, they have the best team in the division led by their elite young QB Justin Herbert who ranked #1 in the league in 4th Quarter Touchdowns (15) last year. They have a stout Offensive Line and the addition of Khalil Mack and JC Jackson to their defense should send fear down any opposition QB’s spine. As earlier stated, this is the toughest division to call and it wouldn’t be a surprise if any of the teams won it but it just feels like a year for the Chargers.

The Green Bay Packers have won this division in 8 of the last 11 seasons including the last 3 in a row. Led by reigning MVP Aaron Rodgers, this team has stamped their authority on their rivals losing just 7 division games in the last 3 seasons while winning 29. However, the loss of Devante Adams who is widely regarded as the best Wide Receiver in the league could be a problem. Perhaps this could be the challenge needed by Aaron Rodgers who has won the last 2 MVP awards but still gets his abilities questioned (and maybe rightly so given his struggles in the playoffs). Also, the expected return of Offensive Tackle David Bakhtiari in a few weeks could provide a boost. At some point, the Packers’ dominance will end and the Minnesota Vikings led by QB Kirk Cousins & new head coach Kevin O’Connell are well positioned to do that but it won’t happen this season.

The Atlanta Falcons and The Carolina Panthers aren’t winning this, let’s get that out of the way. I’m picking the New Orleans Saints to win this which is a bold choice given just how much favoured Tom Brady’s Tampa Bay Buccaneers are. This feels like the 2020/2021 season when The New Orleans Saints won the division but the Buccaneers (2nd) went on to win the Super Bowl. And no, this is not me picking the Bucs as Super Bowl champions. For some strange reason, Tom Brady has struggled against the Saints in the Regular Season since joining the Bucs. He’s faced them on 4 occasions and lost all 4. However, his only win was the most important one as he eliminated them in the playoffs back in 2021 on his way to winning the Super Bowl. While it is foolish to bet against the 45-Year-old QB, he did retire at the end of last season then unretired, then flirted with the idea of joining another team as part-owner/player, then take a strange 11-day holiday in the middle of training camp and has seen his safety blanket Rob Gronkowski retire. While the addition of Shaq Mason at Tackle and veteran Wide Receiver Julio Jones could provide some help, something doesn’t feel entirely right in Tampa Bay.

Gambling on consistency from Winston for an entire season is for the brave but the New Orleans QB did look good before he got injured last season. On paper, the Saints have the best team in the division with a Top 5 Defense as well as a healthy Wide Receiving group. I’m backing them against heavy odds.

This is as close as you can get at the very top. The race for the NFC East title is expected to be an interesting one between The Dallas Cowboys and the Philadelphia Eagles. The NFC East has not had a team win the division in consecutive seasons since 2004 which is bad news for the Cowboys who won it last year. 9-time Browler Tyron Smith will be out indefinitely with a knee-fracture which is terrible news for them while WR Michael Gallup will miss a few games due to (a less severe) knee injury. While the Cowboys have the superior QB in Dak Prescott, the Eagles made significant improvements across almost every position. In his first year as the starting Quarterback, Jalen Hurt had a 8-7 record, passed for  3,144yards but even more impressive, rushed for 784yards; the most by any Quarterback in the league making him one of the top dual-threats. The addition of A.J. Brown should improve the Eagles’ passing game while the signing of Haason Reddick and (the drafting of) Jordan Davis and Nakobe Dean will boost their defense.

The Seattle Seahawks are clearly in a rebuilding year so that puts them out of this. For the Arizona Cardinals, they should be in the mix for the division title but their recent seasons have shown a disturbing pattern; they start in superb form but the season on a low. Even more worrying, they’ll be starting the season without star WR DeAndre Hopkins who will miss the first 6-games due to a suspension. This leaves us with the San Francisco 49ers & the reigning Super Bowl champions, Los Angeles Rams. These teams are coached by some of the most gifted young coaches of this generation and it’s no surprise they’ve repeatedly impressed over the years.

Despite losing defensive juggernaut Von Miller to the Buffalo Bills, The LA Rams still have Aaron Donald and Jalen Ramsey; arguably the two best defenders in each of their positions. They’ve also lost Odell Beckham Jr. to injury but still have Super Bowl MVP Cooper Kupp and added Allen Robinson as a replacement for Beckham. Perhaps the biggest worry for the LA Rams is the health of QB Matthew Stafford. The injury to his right shoulder saw him miss all 3 pre-season games and this could affect their start. The 49ers on the other hand are a healthier side and this could be the difference. Head Coach Kyle Shanahan has named sophomore QB Trey Lance as his starter going into the season but keeping Jimmy Garoppolo on the roster is a good move; it’s nice to have a backup QB who is 2 seasons removed from taking the team to a Super Bowl appearance.