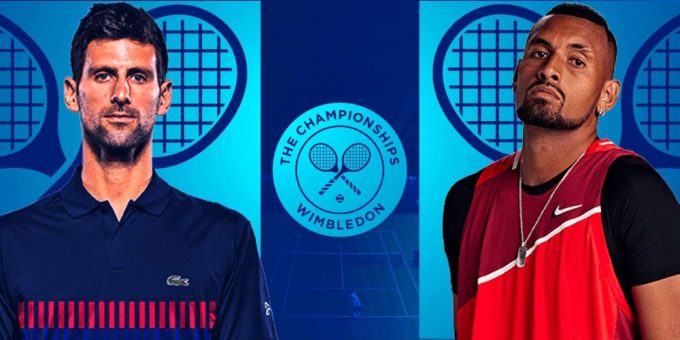 Unfortunately for tennis fans, Rafael Nadal’s untimely withdrawal from the Wimbledon semifinals meant that the dream Djokovic- Nadal final they all wanted to see did not materialize.

While it’s always sad to see a legend exit a tournament that way, we still have a smashing final tomorrow to look forward to between the tournament favorite, Djokovic, and tennis bad boy, Nick Kyrgios.

Djokovic, on the other hand, will be eager to win this final and make it 21 Grand Slam singles wins, reducing Nadal’s Grand Slam lead to just one.

Read on below for their H2H stats, form guide, injury report and our prediction!

Djokovic is the #3-ranked player in male Tennis while Kyrgios is 37 places behind the Serb in 40th.

The two players have met twice, both times in 2017. On both occasions, Kyrgios emerged victorious. He will be hoping tomorrow’s final will have a similar outcome.

To meet in a Wimbledon final, both players must scale six rounds of games successfully, which both Kyrgios and Djokovic have. Each player’s form for the last six games is (W-W-W-W-W)

Neither camp has reported an injury to either of the two players, although Kyrgios benefited from Rafael Nadal having to withdraw with an abdominal injury.

Djokovic has appeared in 32 Grand Slam finals while this is Kyrgios’s first singles Grand Slam final appearance.
Djokovic has won 87 singles titles in his career, including 20 Grand Slam titles while Kyrgios has won six ATP Singles’ titles and zero Grand Slam singles.
Despite his ‘favorite’ tag, Djokovic should be wary. He has never broken Kyrgios’s serve. The Aussie is currently 23-23 in service holds against the Serb legend.
Currently ranked 40th on the ATP rankings, Kyrgios will be the lowest-ranked player Djokovic has faced in a Grand Slam final.
Djokovic has now won 27 straight games at Wimbledon with a chance to make it 28 on Sunday.

Djokovic is the favorite to win. Bet on that @ 1.28 odds with an active odds boost
Kyrgios’s serve has caused Djokovic problems in the past. Bet on that to continue with our ‘Player 2 (Kyrgios) wins at least a set’ market valued @ 1.45 odds
Djokovic has already pulled off a two-set comeback at this Wimbledon when he beat Jannik Sinner in the Quarterfinal. There is no player better equipped with the mentality to find a way back from the early problems Kyrgios will cause. Bet on a 2/1 double result @ odds of 6.20