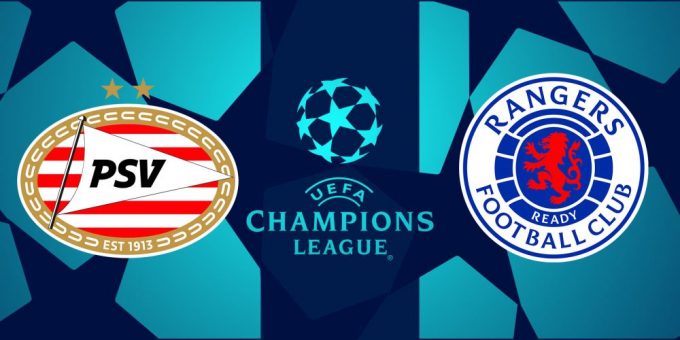 Rangers travel to the Philips Stadion tonight to face PSV in the Champions League playoffs for a chance to feature in the group stage draws on Thursday night. The Dutch side were able to force Giovanni Van Bronkhorst’s side to a first-leg 2-2 draw in Scotland. Of course, with the away-goal rule scrapped since last season, Wednesday’s match will be all to play for.

The loser of this tie will have to settle for the Europa League. And yet, neither of the sides will be content with playing in Europe’s second-tier club competition. Not least, Rangers, who will be keen to make progress after an excellent campaign that culminated in a loss in the final last season.

Seeing how things panned out last season, Rangers will feel some sense of pain knowing that their 50-year wait for a European title could have ended with a trophy parade around their beloved Scotland. Alas, it did not.

Nevertheless, their journey to the final last year was genuinely exciting. It was brilliant too, especially during the knockouts. They finished in second place behind Lyon with just eight points from a possible 16. In fact, they lost their opening two matches to Lyon and Sparta Prague, respectively.

This meant that they would have to begin the knockout phase in the round of 32. There, Borussia Dortmund, who had been demoted from the Champions’ League group stages were waiting. The Gers were not favorites to progress. However, after 55 minutes at the Signal Iduna Park in the first leg, the Scottish giants were 4-1 up. The impressive James Tavernier and forward, Alfredo Morelos were both on the scoresheet. With one foot firmly planted in the next round, they forced the Germans to a 2-2 draw at the Ibrox Stadium.

The draws pitted them against Red Star Belgrade in the round of 16. At home, Tavernier and Morelos came to the party once again as they overcame the Serbian side 3-0. Even though they lost the second leg 2-1 away, they had done enough to progress with a 4-2 aggregate score.

The quarter-final against Braga was dramatic. Indeed, Rangers had to dig in to progress. They lost 1-0 at the Braga Municipal stadium in the first leg. The second leg in Scotland was different. Rangers had strolled to a 2-0 lead and were primed to progress to the semi-finals. Their opponents had also been reduced to ten men. But with seven minutes left in the second half, David Carmo rose highest and scored from a corner to make it 2-2 on aggregate and force extra time. Kemar Roofe then finished from close range from a Joe Aribo assist in the 100th minute to secure his side’s place in the last four.

A semi-final first-leg meeting against Leipzig ended in a one-nil loss in Germany. But by now, the Ibrox stadium had become a fortress. The likes of Christopher Nkunku and Dani Olmo would be up for an arduous task. After 18 minutes and some exciting work on the flank from Glen Kamara, Tavernier made it 1-0. The Finnish winger would then double the lead five minutes later. Nkunku halved the aggregate score in the 70th minute. With 10 minutes left to play, John Lundstram scored from a rebound to send Rangers to the final.

It had now come to this. Another German side was in the way between them and a European trophy. They had taken out two German teams already, but Frankfurt was a different opposition- a team that had defeated Barcelona on the way.

Morelos was unavailable, and Aribo had to start in the number 9 position. The Nigerian had not scored in the competition in 16 matches played. Yet, he had to do a different job for Van Bronckhorst’s team.

In the 57th minute, Aribo delivered the opener, pouncing on a poor defensive header and managing to retain his composure to finish past Kevin Trapp. The fans, all decked out in Blue, were on their feet cheering.

With no further goals scored, extra time was imminent. Rangers had an opportunity to win it in the 118th minute, but Trapp produced an extraordinary save to deny Ryan Kent from five yards. They would now settle for penalties.

Aaron Ramsey would then miss his side’s second penalty, giving Trapp another chance to become a hero as Borre scored the decisive penalty on a wild night in Seville.

Tonight, PSV will hope that their superior H2H record (1 win compared to Rangers’ 0 wins and two draws) will see them through to the Champions’ League group stage.

The post PSV vs Rangers  appeared first on BetKing Blog.