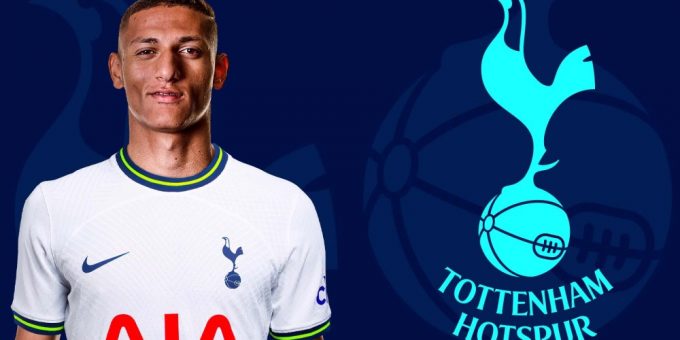 For ambitious clubs, progress is constant as they continually search for ways to improve their team’s chances of success.

Last season, Kulusevski’s signing proved to be vital to Tottenham as his contributions, along with Kane’s and Son’s, fired Tottenham to the final Champions League spot ahead of rivals, Arsenal.

Ahead of the new season, the North London team have shown their ambition with a move for former Everton forward, Richarlison.

What will this move mean for Tottenham? Read on for our thoughts

The forward line of Son-Kane-Kulusevski proved vital last season and will continue to be relied on this season. However, qualification for the Champions League means there is a need for more strength in depth if they want to progress this season.

Harry Kane started last season unsettled and took a while to find his stride. Expect him to hit the ground running early next season along with Heung-Min Son. The Korean forward will rightly feel snubbed after getting zero recognition for his amazing performances last season and will be looking to avenge that slight.

The signings of Fraser Forster, Yves Bissouma, Ivan Perisic and now, Richarlison have elevated expectations. The Lilywhites now have the strength in depth to challenge Manchester City and Liverpool for the English Premier League as well as a prolonged run in the UCL at least.

What Richarlison brings to Tottenham

Richarlison has not been particularly prolific over the course of his career. Last season, the only attacking metrics he beat Son in were penalties taken/scored, headed goals and big chances misses.

He excels by working hard for the team and doing the less glamorous work, however. In the same season, he outworked the South Korean forward in almost all defensive categories. Conte will be a huge fan of that part of his game.

The Brazilian has been accused of going to ground too easily in the past. In new teammates Kane and Son, he will find kindred spirits who have also faced the same accusations. Richarlison should not worry about whether the Tottenham fans will take kindly to his antics. If he continues to work hard and score goals, the fans will quickly get behind him.

Usually, when this much money is paid to sign a player, they’re guaranteed a starting lineup place. Conte does not work that way, however. Richarlison will have his chance to earn a starting spot in the preseason games but if he does not play well, Kulusevski will be right behind him, pushing for his spot.

Since Kane and Son will both play in his preferred positions and are considered undroppable, Richarlison will be expected to make the third spot his own and provide cover for the other two when they’re injured/rested.

The only summer signing who is not expected to get a spot in the starting XI is backup goalkeeper, Fraser Forster. The others are expected to challenge for, and eventually get starting spots in the squad.

This summer is a departure from how Daniel Levy usually works. To keep Antonio Conte on board, Tottenham have gone all-in and given him everything he wants. How well this season goes will determine whether that has been a good decision or not.