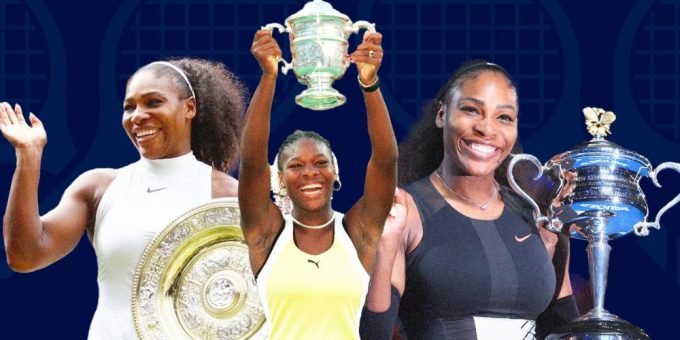 The day many dreaded is here. Serena Williams has announced her upcoming retirement.

For over a year now, it has been evident that the curtains would soon come down on Serena’s illustrious tennis career. Well, it has now been confirmed by the player herself.

The almost 41-year-old, in an emotional article for Vogue Magazine’s September issue which she penned herself, was unwilling to use the word ‘retirement’, terming it an ‘evolution’.

“I have never liked the word retirement,” she admitted. “It doesn’t feel like a modern word to me. I’ve been thinking of this as a transition, but I want to be sensitive about how I use that word, which means something very specific and important to a community of people. Maybe the best word to describe what I’m up to is evolution.

“I’m here to tell you that I’m evolving away from tennis, toward other things that are important to me. A few years ago… I started a family. I want to grow that family.”

This comes less than 24 hours after winning her first match in 14 months against Nuria Parrizas-Diaz in the first round of the National Bank Open in Toronto, Canada.

While she has not given an exact timeline for her retirement, she mentioned on Instagram that “the countdown is on”, and by all indications, the US Open will be her final tournament as a professional tennis player.

When Serena Williams turned professional in 1995, nothing suggested the black kid with beaded braids would go on to become arguably the greatest women’s tennis player of all time. Yet, here she is, 28 years later, calling time on a career that has seen her gather too many accolades to count.

Twenty-three Grand Slam singles titles, the most by anyone, man or woman, in the Open Era; 73 career WTA singles titles; Olympic champion; 319 weeks as world no.1; highest-earning woman athlete of all time. One could go on and on.

Serena Williams, alongside older sister, Venus, changed the world of tennis positively. Her dominance in women’s tennis is unlikely to ever be matched.

No one has boasted an intimidating presence quite like Serena. Even the thought of facing her made other players tremble in fear. No other player might be that dominant ever again.

After capturing her 23rd Grand Slam title at the Australian Open in 2017 (while she was pregnant with daughter, Olympia), Serena was largely tipped to break Margaret Court’s record of 24 Grand Slam titles, the most in history, but childbirth, age and a competitive women’s tennis tour derailed those hopes. She reached four more Grand Slam finals but got beaten all four times.

Many said Serena did not care about winning that elusive 24th Slam title but she has now admitted that she actually did.

“There are people who say I’m not the GOAT because I didn’t pass Margaret Court’s record of 24 Grand Slam titles… I’d be lying if I said I didn’t want that record. Obviously I do. But day to day, I’m really not thinking about her.

“If I’m in a Grand Slam final, then yes, I am thinking about that record. Maybe I thought about it too much, and that didn’t help. The way I see it, I should have had 30-plus Grand Slams.

“I had my chances after coming back from giving birth. I went from a C-section to a second pulmonary embolism to a Grand Slam final. I played while breastfeeding. I played through postpartum depression. But I didn’t get there. Shoulda, woulda, coulda. I didn’t show up the way I should have or could have. But I showed up 23 times, and that’s fine.”

Twenty-three Grand Slam titles is truly remarkable and we might never witness such supremacy again in women’s tennis.

There are a number of immensely talented women currently spearheading women’s tennis. It is such an entertaining and unpredictable period in the sport, but it is difficult to see any of them becoming as dominant as Serena. Maybe it is a little too early to tell, though, as many of them are still quite young and have a lot of time to reach greater heights.

Current World No.1 Iga Swiatek is having an imposing season and is proving she deserves to sit at the summit of the rankings. With six consecutive titles in the first half of the year, she has become a force to be reckoned with. Winning 37 consecutive matches (the longest WTA winning streak in the 21st Century) is a mind-blowing feat no one saw coming. At 21, with two Grand Slam titles to her name, she is taking the WTA by storm and will likely add more Slams to her tally.

Since Cori ‘Coco’ Gauff stepped into the limelight at 15 in 2019, she has been dubbed the next Serena Williams, and understandably so. The young American, now 18 and World No.11, has been making steady progress and played in her first Grand Slam final at this year’s French Open.

Four-time Slam champion Naomi Osaka, who defeated Serena in the 2018 US Open final, is undoubtedly still one of the tour’s top guns despite her slump down the rankings. She is gradually clawing her way back up and is currently ranked 39th in the world.

Ons Jabeur, 27, who recently played in her maiden Slam final at Wimbledon, is the second-most dominant woman this year after Swiatek. The Tunisian is a potential multiple Slam champion as well.

The likes of Anett Kontaveit, Paula Badosa, Elena Rybakina, Aryna Sabalenka, Maria Sakkari and more have made the WTA very competitive but some of the best players on the tour do not have Slam titles to show for it yet. The WTA however has more active Grand Slam champions than the ATP where the Slam titles are largely split between three players.

Of course, time will tell and maybe it is unfair to compare, but it might take a while before any player displays the sort of authority Serena did.

Every career comes to an end and now, like Williams said, it is time for her to focus on other things that are important to her. For every athlete, there is a life outside sports – family, other interests, business ventures, even rest – and while it is difficult to stop playing a sport that has been the major part of their lives, every athlete, at some point, needs to step away from the sport dear to their hearts. That is exactly where Serena is at the moment.

The American also admitted that she and husband, Alexis Ohanian, are looking to have another baby and Olympia desperately desires to become a big sister.

“Believe me, I never wanted to have to choose between tennis and a family. I don’t think it’s fair…. Don’t get me wrong: I love being a woman, and I loved every second of being pregnant with Olympia.

“A lot of people don’t realize that I was two months pregnant when I won the Australian Open in 2017. But I’m turning 41 this month, and something’s got to give.”

Serena is hardly the first woman to choose personal life over sport and she will not be the last either. It is a sacrifice many women have to make.

With her many business ventures, she will always have a busy and fulfilling and successful life even off the court and, to be honest, she deserves it.

For now, Serena and her fans will enjoy what is left of her career, however many the matches are. Maybe she can end it on a high, but even if she doesn’t, she has absolutely nothing to prove.

Thank you, Serena Williams. What a ride it has been!