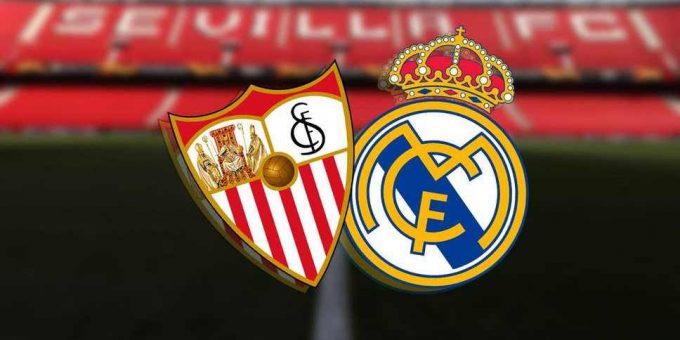 It’s a top of the table clash in La Liga tonight as Sevilla host Real Madrid at the Ramon Sanchez Pizjuan.

With 7 games to go for both teams, Sevilla needs to keep their already faint hopes of catching Real Madrid alive with a home win.

It’s been a good week for fans of Los Blancos. Despite a home loss to Chelsea, they qualified for the UCL semifinals on aggregate while bitter rivals, Barcelona also lost at home and crashed out of the Europa league. A win this weekend to extend their La Liga lead would make it the perfect week for Real Madrid.

Read on below for our detailed Sevilla – Real Madrid match review!

Sevilla vs Real Madrid H2H
Real Madrid have been the dominant team in the history of this fixture. The Spanish giants have won 33 games to Sevilla’s 16 wins and there have been just four draws in this fixture.

In their last 10 H2H games, Sevilla have won just two games to Madrid’s seven wins. They’ve also split the points once, with one game ending in a draw.

Form Guide
Sevilla’s form has been abysmal in the last five games with a solitary win, two draws and two losses. (Form: W-L-D-L-D).

Key Matchups
There will be several key matchups that will decide where this game is won and lost in defense, midfield and attack.

Defense – attack: Defenders on both teams will be kept busy tomorrow. Jules Koundé and Diego Carlos have the unenviable task of trying to contain Karim Benzema and Vinicius Junior. Éder Militão returns to the Madrid squad after missing their last game through suspension. Along with David Alaba, the Brazilian will attempt to keep the Sevilla forwards, Rafa Mir and Lucas Oscampos, from adding to their 15 combined goals.

Midfield: Former Croatian International teammates, Ivan Rakitić and Luka Modrić are the creative lynchpins of their respective sides. The game will be decided on which of these close friends can seize control of the midfield zone.

Sevilla Vs Real Madrid Team News
The home side will not be able to call upon the services of Suso and Fernando while Dutch defender, Karim Rekik is still a doubt for the game.

The visitors have several players out injured. Eden Hazard is still out after his surgery. Luka Jovic, Jesus Vallejo, Marcelo and Ferland Mendy will also miss the game. Isco is also a doubt while Karim Benzema will undergo a late fitness test but is expected to be fit enough to make the Real Madrid squad.

Sevilla Vs Real Madrid Prediction
The Real Madrid players are vastly experienced. The spine of the squad has done this before and they’re good value to grind out a win tomorrow, by any means necessary. There’s a reason most experts are backing Madrid to win away at Sevilla.

Karim Benzema leads La Liga in both goals (24) and assists (11). The Frenchman is a good bet to continue his amazing form tomorrow and is also good value for a Benzema anytime goalscorer bet.

This fixture has had a maximum of 6 yellow cards in their last 5 games. Another bet the statistic favor is Under 6.5 yellow cards.

Enjoy our fantastic offerings of games, bonuses and amazing odds on BetKing today!