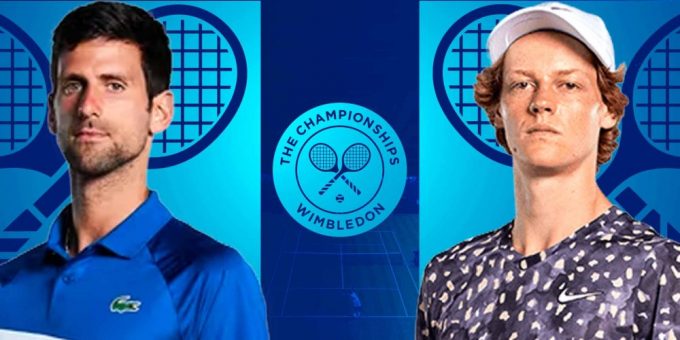 It takes a truly exceptional player to muscle in on the duopoly that Roger Federer and Rafael Nadal had on tennis, but that is exactly what Novak Djokovic did.

The Serb is now arguably the best tennis player in the world and the favorite for this year’s Wimbledon tournament.

Tomorrow, he will face Italian wonderkid, Jannik Sinner for a place in the semifinals. Despite the pedigree of opponent, the 20-year-old Sinner will not be overawed by the occasion.

Will we witness an upset or tune in to see Djokovic’s 26th consecutive win on grass? Read on for our game preview below!

The young Italian has done well to rise to 13th in the ATP rankings, but Djokovic outclasses him there with a #3 ranking.

The two players have faced off once before – once in last year’s Monte Carlo Masters. On that occasion, Djokovic won easily in straight sets; 6-4, 6-2.

Djokovic has won four of his last five games and lost the fifth to Nadal in the quarterfinals of the French Open. (W-W-W-W-L)

Sinner has an identical record.; he has won four and lost one of his last five games as well. (W-W-W-W-L)

No injuries have been announced by either camp. Neither player is expected to be limited by an injury during their quarterfinal match.

With how this year’s Wimbledon is shaping up, it is Djokovic’s best chance to win another Grand Slam Singles title and cut Rafa Nadal’s lead to one and pull one clear of Roger Federer. Expect him to be at his relentless best to make that happen.