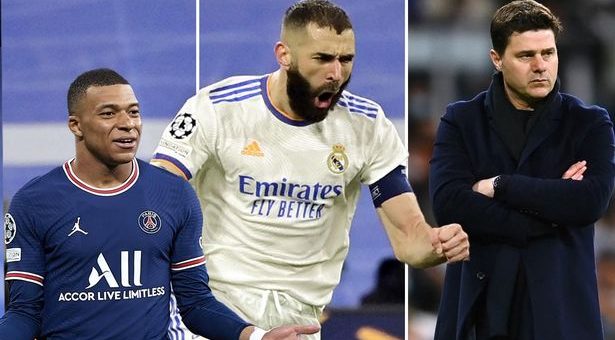 “The Real Madrid shirt is white, it can be stained with mud, sweat or even blood but never with shame” – Santiago Bernabeu

On Wednesday night, Real Madrid demonstrated to PSG what it means to have a winning mentality on the biggest stage. Unfortunately for fans of the Parisian giants, they were reminded that no matter how much money their club spends on acquiring the best players, there are intangibles that must be earned the hard way.

Mauricio Pochettino will almost certainly be fired after this latest embarrassing loss. However, the players must accept some blame for failing to support Mbappe and collectively wilting once Madrid took the initiative.

What next for PSG?

The French giants have a 13-point lead in their domestic league with 11 games left. Barring a spectacular collapse, they will go on to win the title this season. Unfortunately, that will not be enough to save their season.

Signing promising young full backs, Achraf Hakimi and Nuno Mendes for huge sums, along with established free agents, Gini Wijnaldum, ‘Luigi Donnaruma, Sergio Ramos and Lionel Messi was a clear statement of intent. Crashing out in the first knockout round will have far-reaching consequences.

The buck always stops with the manager. He’ll almost certainly be sacked, but this game will not reflect poorly on Pochettino’s ability to manage at the highest levels. Prior to the late collapse, he set his team up well enough to dominate the record UCL holders for the entirety of the first leg and the majority of the second leg before the players lost their cool late on. As things stand, he’s still the favorite to take over as manager of Manchester United next season.

More superstitious fans will blame PSG’s struggles on a “Champions League curse”, but the more likely solution can be found by looking inward. The power wielded by the stars is excessive and must be addressed. Hiring a coach like Zidane will not make a difference unless the dressing room culture that empowers players over their Head Coach is changed.

What’s next for Real Madrid?
Madrid president, Florentino Perez will have been absolutely delighted with that result. In one fell swoop, Madrid moved to the next round, eliminated a hated rival and gained the upper hand in the Mbappe stakes.

However, it’s doubtful they’ll be able to repeat their heroics in the next round. While they played well to come back and defeat PSG, some of their possible quarterfinal opponents are: Manchester City, Liverpool, and Bayern Munich. Neither of those teams is likely to lose their cool like the PSG players did.

Even if they do not win the Champions League this season, their future looks bright. Militao and Alaba are solid in front of Courtois, with Mendy at left back, and Modric and Kroos have an experienced understudy in Eduardo Camavinga. After replacing Kroos on Tuesday, the young midfielder performed admirably and will be an important player for them in the future.

In attack, they have a still-potent Benzema, along with Vinicius Junior and Rodrygo.

Hazard, Bale, and Jovic are likely to be sold, and a new signing at right-back prioritized. The rumors linking Haaland and Pogba to Madrid will also be closely monitored.

What next for the star-studded PSG forward line?
Lionel Messi’s season was not supposed to end like this. After joining PSG last summer and winning a record seventh Balon d’Or, his form has been inconsistent, and this latest setback is his seventh straight ignominious exit from the UCL. With two years left on his contract, rumors of a return to Argentina are making the rounds already.

The arrival of Neymar at PSG in 2017 was heralded as a seismic shift that would eventually topple the established old guard. That has not happened. Given that he left Barcelona to become the world’s best player, only to be eclipsed by Mbappe and fail to win any major European trophies, his time at PSG has been disappointing.

Mbappe will have noticed how easily Madrid regained control of the game and how easily his side lost their heads. If he joins Real Madrid this summer, it will be a hammer blow to PSG’s ambitions to match Los Blancos.

Final thoughts
If they progress to the semifinals, Real Madrid have to be considered favorites to win it all, given their experience at closing out competitions even when they’re not at their best. At 8/1 odds, that bet could end up being a sleeper win.

You can bet on the remaining UEFA Champions League fixtures on Betking today!