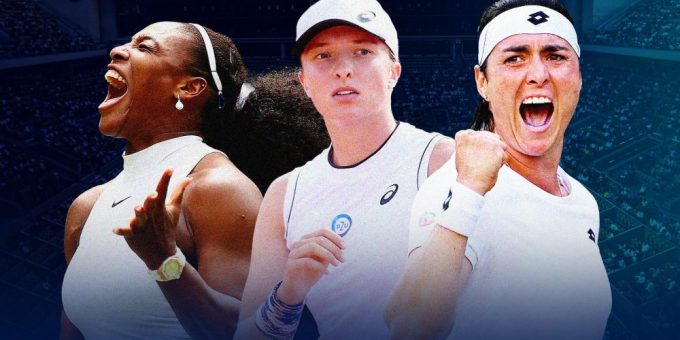 With the final Grand Slam tournament, the US Open, drawing closer, players are gearing up and taking full advantage of the hard court swing to get matches under their belts ahead of the big one.

World no.1 Iga Swiatek headlines the draw as top seed and one of the favorites for the title.

The Pole has had a mind-blowing season so far, gathering six consecutive titles in Doha, Indian Wells, Miami, Stuttgart, Rome and Roland Garros. She also set a record for the longest winning streak in the 21st century (37 matches), an impressive way to mark her ascension to the summit of the rankings following Ashleigh Barty’s surprising retirement back in March.

Britain’s Emma Raducanu will be making her debut at the prestigious tournament as she prepares to defend the US Open title she won in remarkable fashion in 2021. The Williams sisters have also added to the buzz surrounding the tournament, with Serena Williams entering using her protected ranking and older sister, Venus, receiving a wildcard.

World no. 9 Danielle Collins is the only top ten player left out of the draw following her withdrawal due to a neck injury.

23-time Grand Slam champion Serena will be playing in just her second event since making her comeback after a year of inactivity. After her opening round loss to Harmony Tan at Wimbledon, there was a lot of uncertainty as to when or if she would return to action, but her entry into the draw in Toronto sent a message that she intends to play in front of her home fans at the US Open. It will be her first hard court tournament in 18 months.

With the draw now made, it has been determined that Serena will face a qualifier in the first round. She could potentially take on fellow veteran Victoria Azarenka or 2020 Olympic champion Belinda Bencic in the second round. Her tough section of the draw also features four-time Grand Slam champion Naomi Osaka, 2021 US Open finalist Fernandez and blazing world no.1 Swiatek. That is a tough path for the 40-year-old, who has played only one singles match in over a year, but she is not one to underestimate no matter the circumstances. She showed encouraging signs even during that shock Wimbledon loss to Tan that can be built on.

Venus recently played her first match of the year at the Citi Open in Washington. World no.111 Rebecca Marino defeated the 42-year-old 4-6, 6-1, 6-4 in the first round, and now Venus will be looking to put a mark in the win column as she takes on Jil Teichmann to begin her campaign in Toronto. Teichmann is having an impressive season of her own and is currently on a career-high ranking of no.21 in the world.

The top eight seeds have received byes, but the opening round still consists of some mouth-watering clashes.

Toronto is set to be lit up, and it could very well offer us a glimpse of what to expect when the US Open kicks off on August 29.