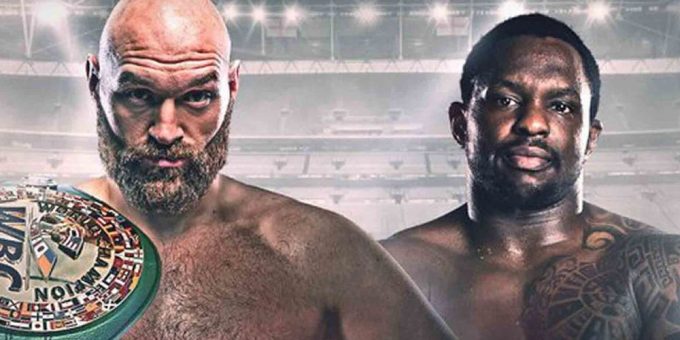 There’s nothing quite like a heavyweight Boxing Bout to draw an enthralled arena audience of the most powerful and influential people in the world and millions of eyes on TV.

On Saturday, current World champion, Tyson Fury will take another step to ensure that his name rings out as loudly as many of the above legends when he touches gloves with Dillian Whyte at Wembley Stadium, London.

Two prizefighters, both Englishmen in a fight many have already dubbed “The Biggest fight in British boxing history”. Who wins? The favorite, Tyson Fury or his Challenger, Dillian Whyte?

Read on for our preview of the big fight below!

Matchup
This will be an interesting matchup for both boxers. At this point, Tyson Fury is a well-known quantity.

The Gypsy King, as he’s popularly known, regularly switches up his tactics depending on the type of boxer he’s facing.

At 6’9”, he’s the tallest heavyweight champion alive. In addition to using that massive size and reach to his advantage, he’s deceptively quick and light on his feet.

At 6’4”, Dillian Whyte is 5 inches shorter than Fury. He will look to offset the height and reach deficit by being aggressive.

Whyte is known for using his weight to lean on opponents and tire them out so Fury will have to watch out for that.

Unlike Fury, he doesn’t have the best footwork and sometimes relies too heavily on his fearsome power punching.

This can be used against him by a fighter as canny as Fury who simply needs to wait for him to swing and miss before countering aggressively.

That aggressiveness has worked against Whyte in the past as his propensity for getting knocked down after a wild swing has cost him valuable points at crucial moments.

Whyte will try to live up to his nickname and go to work on the biggest target – Fury’s body in an attempt to soften up the behemoth before attempting a knockout punch.

Overcoming Setbacks
The journey to this point has not been smooth for either fighter. In 2015, Tyson Fury hit rock bottom after winning his first Boxing World Title against Wladimir Klitschko.

His mental health took a downturn as he battled depression, bipolar disorder and substance abuse. As a result, his weight ballooned to as much as 400lbs and he was even banned from Boxing for a while after failing several drug tests.

Fortunately, he conquered his demons, returned to his peak fighting weight, and returned to Boxing to continue his dominant run.

Dillian Whyte revealed that as a youth in London, he got into a lot of trouble and was even shot twice and stabbed in the leg three times. He credited Boxing for him still being alive and out of prison.

In 2012, the 32-year old was banned for two years after testing positive for methylhexaneamine, a banned substance. He returned to the ring in 2014 and has continued the steady progression that now has him in line to fight for the honor of holding the WBC belt.

Recent Form
Tyson Fury’s recent form has been impeccable. In his last five fights, he has recorded four wins and one draw. (Form: W-W-W-W-D)

Dillian Whyte’s recent form has also been good with four wins and one loss in his last five fights. (Form: W-L-W-W-W)

The two boxers each pack a wallop in their fists. This means several knockout attempts by each side is likely.  Special offer on both fighters to be knocked down @ 4.50.