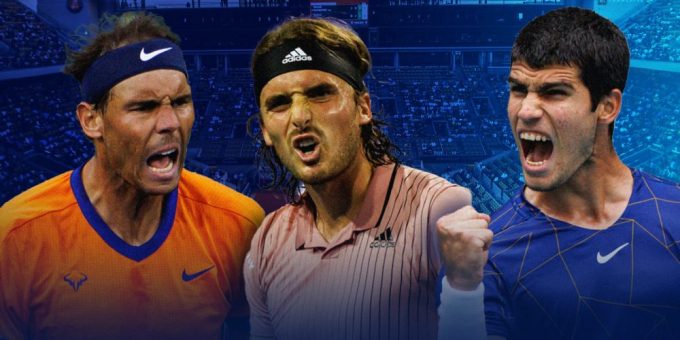 The 2022 US Open is set to be fierce with some mouth-watering clashes right from the first round.

The men’s draw will be missing 21-time Grand Slam champion Novak Djokovic due to his Covid-19 vaccination status and World No.2 Alexander Zverev, who is recovering from ankle surgery, but the field still consists of some of the world’s top players who have more than just the title to gun for.

The World No.1 spot is up for grabs if Daniil Medvedev fails to successfully defend his title, and there are a number of hungry contenders for the position.

Rafael Nadal, Carlos Alcaraz, Stefanos Tsitsipas and Casper Ruud all have the chance to sit at the summit of the rankings at the end of the tournament and this could make Flushing Meadows even feistier than expected.

It has not been such a rosy season for Medvedev, and the World No.1 is in New York as defending champion for the first time at a Grand Slam event.

Knowing the World No.1 spot is also at stake, the Russian will need to give it everything if he does not want to lose on two fronts.

Medvedev now finds himself in a tough position, drawn in the same quarter as Nick Kyrgios, who recently beat him in second round of the National Bank Open in Toronto.

Kyrgios has been in superb form this year, reaching his first Grand Slam final at Wimbledon and winning the Citi Open title in Washington. The Aussie has always been known to cause problems and he is even more of an obstacle now that he is in the form of his life.

Medvedev’s potential route to the title:

Rafeal Nadal’s fitness remains a cause for concern as he begins his quest for a record-extending 23rd Grand Slam title at Flushing Meadows.

The Spaniard has played only one match since withdrawing from Wimbledon due to an abdominal injury ahead of the semifinals. That one match ended in a loss to Borna Coric in Cincinnati and Nadal admitting he was not 100% ready for a return.

While his draw might seem doable, the 36-year-old’s health could stand in the way.

Nadal’s potential route to the title:

The name Carlos Alcaraz has been on the lips of tennis lovers all year as the 19-year-old continues to impress. The young Spaniard reached his first Grand Slam quarterfinal at this same tournament last year and will be aiming to go past that stage for the first time.

These days, young as he is, Alcaraz is a contender in every tournament he plays and it is no different at Flushing Meadows. With the title, he could become the youngest World No.1 in ATP history.

With Jannik Sinner and Coric falling in the same quarter, Alcaraz’s draw is a tricky one. In the first round, he faces fellow rising youngster Sebastian Baez.