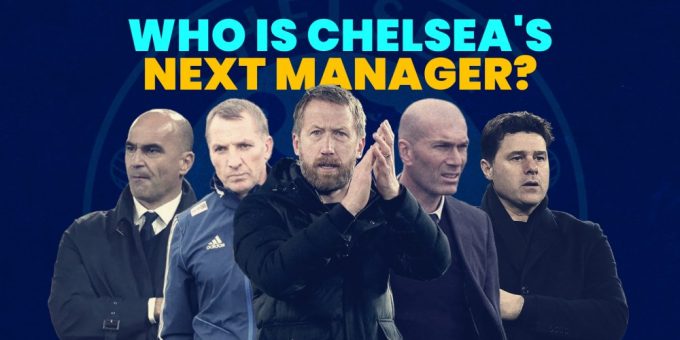 Who’s going to be Chelsea’s next manager?

Despite Chelsea’s uninspiring form to start the season and their shock loss to Dinamo Zagreb yesterday, few football fans expected Chelsea to fire their Champions League-winning coach so soon. Unfortunately for Tuchel, that is exactly what happened. Two games after a transfer window in which he had been backed closed, he’s gone.

As it so often has been for Chelsea over the last two decades, the London club now find themselves searching for a new manager. Who can they hire that will not only fix the mistakes Tuchel made over the last two seasons, but will also be willing to take over such an oddly assembled squad?

At 1.15, Graham Potter is the odds-on favorite to replace the departing Tuchel, and for good reason. Despite being granted limited funds compared to the rest of the managers on this list, he has managed to improve Brighton every season, despite continually losing his best players to bigger clubs.

The biggest criticism Tuchel faced at Chelsea was his preference for defensive, reactive football over proactive, attacking gameplay which meant that the Blues were too often on the back foot, even against smaller clubs. That will not be a problem with Potter. Since he joined Brighton in 21019, the Seagulls have played attractive, attacking football. He’s also a good coach defensively. Last season, Brighton finished 9th in the EPL and had conceded the 6th – least goals in the Premier League.

Any concerns Chelsea have about appointing him would be about his lack of experience managing world-class players. If he cannot exert his authority in a dressing room that has already seen off more experienced coaches in the past, he will be out of a job very quickly.

The former PSG manager has stated in the past that he would rather work at a farm back home than manage the rivals of one of his former clubs. However, Tottenham fans would be naïve to believe that their former manager would turn Chelsea down solely because of those comments.

For one thing, the move will restore his reputation as one of the best managers in world football if Chelsea finish the season much better than they started it with him in charge. His disappointing PSG stint raised questions about his ability to manage a star-studded squad and he should relish the opportunity to silence his doubters. He would also get to level the blame firmly at the Lionel Messi, Kylian Mbappe, Neymar-led PSG squad with any Chelsea success.

Of the three favorites, he’s probably the best choice; He has experience at managing Champions League sides with heightened expectations, his Tottenham side played attacking football but was also defensively sound, and he has a lot to prove.

Bet on Chelsea to hire Pochettino to replace Thomas Tuchel @ 4.50

The legendary French tactician is one of the most sought-after managers in the game; whenever the elite Football clubs need a Head Coach, Zidane’s name is sure to come up, and for good reason.

Since he resigned his position as Real Madrid manager in 2021, he turned down the chance to manager several clubs including PSG and will be a difficult get for Chelsea.

However, it would be a steal if new Chelsea owner, Todd Boehly, could pull it off. He has already shown that he values star power with his pursuit of Cristiano Ronaldo over the summer (a move Thomas Tuchel opposed vehemently by the way) and with the exception of Pep Guardiola and Jurgen Klopp, football coaches don’t come as good and as shiny as Zinedine Zidane.

Leicester’s terrible form this season means that Rodgers is unlikely to be the option Chelsea will choose to replace Tuchel. This is reflected in how high the odds are for him to join the Blues (9.00). However, it’s one they could explore if they fail to land their main targets.

The Irish coach also has experience managing big egos and is a good tactician. In fact, some would say that Leicester’s struggles this season are not solely down to him but the Leicester squad’s inability to translate his instructions onto the pitch.

If Rodgers to Chelsea does happen, it would be an underwhelming one for Chelsea fans and would most likely be on a short-term deal while the search for a permanent coach goes on.

If a deal were to happen, it would at least be cheap. At this point, the Leicester executives probably welcome the interest in Rodgers as it would give them the chance to get rid of a coach who no longer suits them without having to pay out the rest of his contract.

With a November World Cup to prepare for with Belgium, it’s unlikely the Spaniard makes this move unless he can somehow combine both roles a la FIFA Career mode.

Like Rodgers, this is an unlikely move but if it were to somehow happen, Martinez would be well-equipped to deal with the egos in the Chelsea dressing room due to his experiences with Belgium. The move would carry a substantial risk for Chelsea, however. International football is different from domestic football and far less challenging than what Martinez would face at Chelsea.

While we think this is an impossible move, you can still bet on Martinez to join Chelsea @ 20.00

Who do you think the Blues hire to replace Tuchel? Let us know in the comments.